Home
Articles
A healing touch for older people with gangrene
2

A healing touch for older people with gangrene

Gangrene in older adults can pose several health risks if not treated in time. Experts share insights on how to tackle this condition 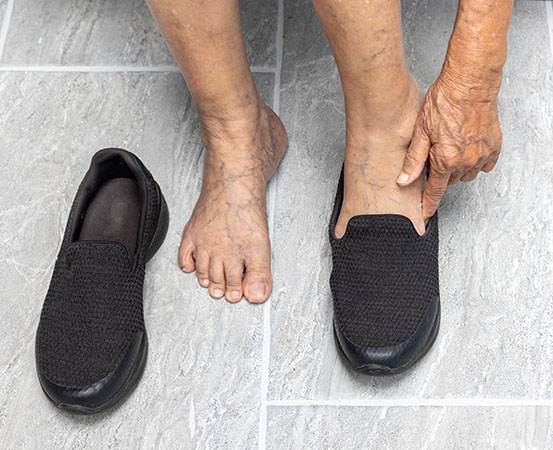 If ever there is an ‘innocuous way’ of infection spreading slowly but dangerously to a particular part of the body, it must be gangrene. For the elderly population, this condition can be especially harmful because of the consequent wear and tear of the body in old age, along with the sum of minor ailments, major health issues and medications administered that may render them more vulnerable.

“It is a disease in which there is the death of body tissue because of inadequate blood supply, change in blood flow or sometimes serious bacterial infection leading to necrosis (premature death of cells) of the tissue,” says Dr Ankita Baidya, consultant, HCMCT Manipal Hospital, Dwarka, Delhi.

Types of gangrene in elderly

Mostly found in people who have vascular disease, diabetes and autoimmune conditions, it usually affects the hands and feet and is largely attributed to poor blood circulation. As the tissue dries up, the skin turns from brown or purplish-blue to black; the tissue then falls off. Unlike other types of gangrene, there is no infection. But dry gangrene can lead to wet gangrene if it becomes infected.

Symptoms include cold, numb and shrivelled skin that causes pain.

This occurs when there is an infection that can be either because of burns or trauma in which a body part is crushed or squeezed. This can quickly cut off blood supply to the area and swelling and blisters appear. It is called ‘wet’ gangrene because it produces pus which can cause infection all over the body. Wet gangrene can also denote internal gangrene that affects the internal organs.

“If it is wet gangrene, pain, redness and signs of inflammation are seen in the affected part,” says Dr Baidya.

This is rare and happens when there is an infection deep inside the body, such as the muscles or organs, usually because of trauma.

This is a fatal bacterial infection that progresses rapidly, destroys tissues in the genitals and nearby areas and is considered a medical emergency. An article published in the International Journal of Gerontology, which studied 90 patients with Fournier’s gangrene, prescribes early diagnoses and aggressive resuscitations to save lives.

Gangrene in the elderly: the risks

“Since it (gangrene) is something that occurs when blood flow is decreased, any condition that lessens blood flow can increase your chances of getting gangrene such as diabetes, narrowed arteries (atherosclerosis), peripheral artery disease, smoking, trauma or serious injury, obesity and a weakened immune system,” says Dr Baidya.

Tests and treatment for the elderly

Other than the routine blood tests to look for signs of infection, doctors may recommend CT and MRI tests to find out if gangrene has spread and gas has built up in the tissues. An arteriogram could also be suggested where dye is injected into the bloodstream; an X-ray then checks the blood flow and spots blocked arteries if there are any.

Blood, fluid or tissue samples may also be taken for a culture test to detect tissue death or the presence of bacteria.

There could be complications to gangrene. When an infection gets into the blood, it can trigger sepsis and thereafter septic shock. “The earlier it is treated, the better the outcome,” explains Dr Baidya.