Home
Articles
Laugh out loud for health and wellness
1

Laugh out loud for health and wellness

Laughter therapy works wonders for the elderly -- by boosting the immune system, protecting the heart, relieving pain and improving mood 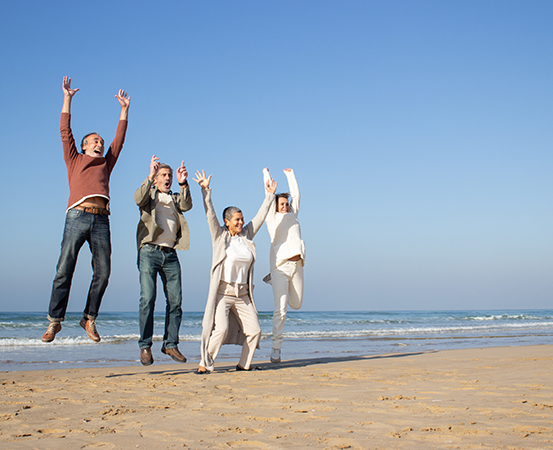 How often do you laugh? If routinely, then it is good for your health, especially if you are a senior citizen, say experts.

In fact, laughter works as a therapy — a form of treatment. Laughter therapy uses various techniques, for example humour, to relieve pain and stress. Result: it helps in improving a person’s well-being.

Moreover, there are other benefits too: it induces a positive outlook, improves appetite and makes individuals fitter to do physical exercise.

READ MORE
An online forum that helps elders meet, exercise and beat loneliness
How to preserve your mobility in later years
Balance the imbalance with vestibular rehabilitation
Why elder abuse is a growing concern

Recalling a case study, Mumbai resident Dr Madan Kataria tells Happiest Health that PT Hinduja, a retired company secretary from the city, joined his laughter club at the age of 73. Dr Kataria, a medical doctor, is popularly known as the “guru of giggling” for promoting laughter clubs across the world. He is also the founder of Laughter Yoga International, an organisation promoting laughter for health in Nashik, Maharashtra.

“Hinduja had a solemn personality; he never laughed,” says Dr Kataria. “He approached me with a lot of scepticism, not sure whether he would be able to laugh or not.

“After joining our laughter club in Mumbai, Hinduja was intimidated [at first]. He hardly laughed. But slowly he gathered confidence and after six weeks he was laughing like no one is watching him. We held a laughter championship in Mumbai, and Hinduja won the championship.”

Deepak Mittal, founder, Divine Soul Yoga, which has centres in Delhi and the Netherlands, tells Happiest Health that laughter therapy is a kind of cognitive-behavioural therapy that could make physical, psychological and social relationships healthy by improving a person’s quality of life.

“When we laugh, it lightens our mental load,” he says. “It also induces physical changes within the body. If a person is going through stress, guilt or anger, laughter can take away your focus from the negative emotion and uplift their mood.”

Mittal says laughter therapy helps to reduce physical pain and may also help people cope with an acute disease like cancer.  “It helps to fight loneliness and decrease the symptoms of depression, as laughter helps to shift the focus from unpleasant things,” he says. “It also reduces blood pressure.” In addition, Mittal says, laughing can help seniors with asthma and bronchitis by utilising the abdominal muscles and diaphragm.

Mittal says laughter therapy increases oxygen to the body’s cells. “In addition, it provides a powerful cardiovascular workout, strengthening the muscles — especially for seniors who are unable to move their bodies to do physical exercises,” he says. “Laughter therapy changes a person’s biological processes at the cellular and molecular levels. It also supports good mental health regardless of situations or circumstances.”

“Laughter increases endorphins and thereby reduces pain and stress,” says Dr Das. “Laughter reduces physical stress and anxiety by relaxing the body and making the mind happy, thus improving the mood. There is no limit to laughter therapy. The elderly should laugh and smile whenever they can, like while watching television, playing with kids and spending time with family and friends.”

Dr Kataria tells Happiest Health that laughter increases the level of oxygen in the body and brain and helps to slow down the dementia process.

“Laughter therapy or laughter yoga is a unique concept,” says Dr Kataria. “We laugh in a group. We start with shared laughter — the foremost exercise. During the process, we become ‘genuine’ towards each other, and people laugh for real.”

Mittal says forced or voluntary laughter has the same psychological and physiological effects as spontaneous or natural laughter. In voluntary laughing, groups engage in the activity while maintaining eye contact and being playful with one another.

“Once you start laughing voluntarily it converts into real and contagious laughter,” says Mittal. “Along with the face, it exercises internal facial nerves and body parts like the oesophagus, throat, nose, eyes and cheeks, laughter therapy means exercise of the body and brain.”

Experts say laughter therapy involves steps that last 15 to 20 minutes. First, clap the hands in a rhythm – it stimulates acupressure points. Then practise deep breathing, which relaxes the lungs and lifts the spirits of a person. Then swing the hands from side to side and laugh like a little kid. This results in a genuine and contagious laughter.

There are four types of laughter therapies:

Dr Kataria says there are laughter-based exercises in laughter therapy. There are some breathing-based laughter exercises like pranayama where people breathe and laugh at the same time.

“Some exercises are designed to make elders more playful,” Dr Kataria says. “There are also value-based laughter exercises. These convey some meaning and values — like appreciation laughter and forgiveness laughter.”