Soft toys can give your kids a hard time

Your kids might love to have colourful soft toys with them all the time, but so do dust mites

As a mom, Stuti Agarwal is always concerned about her elder son’s dust mite allergy. One of the precautions she has taken is to keep the soft toys in her house out of reach from her kids. The colourful soft toys which are miniatures of wild animals and pets not only attract the kids but also the dust mites.

Agarwal, a blogger from Mumbai says that her four-and-a-half-year-old son has been facing dust mite allergy and the typical symptoms associated with it, such as sneezing and a runny nose. Four years ago, when their family lived in Hong Kong, her son used to get rashes frequently, and the parents could not figure out what exactly the issue was. “It was not easy to access the doctors in Hong Kong often. We met one doctor who dismissed it as rashes though dust mite allergy was very common in Hong Kong. He (the son) was just ten months old then. When we moved to Mumbai, it further aggravated with sneezing and a runny nose. Doctors said that it was dust mite allergy,” she says.

The doctors they consulted said a clear ‘no’ to soft toys, she recalls. The soft toys her husband gifted her over the years are now wrapped in plastic and put away. “Soft toys are a huge attraction for dust mites. The fluffy toys which look so attractive are the worst. We have given our kids wooden toys that we can wash often,” says Agarwal.

How to wash soft toys

“Many a time, we overlook the soft toys which are close to the child all the time. With the allergies seen so often among children, we find that soft toys carry a lot of house dust mites,” says Dr Anupama Sen, senior paediatrician, Apollo Clinic, Pune. She adds that the dust mites can cause allergies which can show up as hives, cold or runny eyes.

She also points out that kids with acute dry skin called atopic dermatitis would be more vulnerable to dust mite allergy. The condition can get aggravated if they are exposed to dust mites on the soft toys.

“If the allergy continues, it may further lead to asthma. Asthma is due to allergy because of the allergens from the child’s environment. The dust mites could also be in the child’s pram, crib, bed or mattress,” says Dr Sen. She adds that many surveys have proven beyond doubt that soft toys can be a source of allergies among children. “We must be very careful about giving soft toys to children. We should wash, clean and tumble dry all the toys,” points out Dr Sen.

How to clean soft toys

According to Dr Sen, the best way to how to clean soft toys at home in a tropical climate is to wash them with antiseptic along with liquid detergent and dry them in the sun. She points out that dust mites thrive in a tropical climate because of the moisture and heat. “All toys like teethers, hard toys and pull-along toys must be washed and cleaned before you give them to the kids. At the same time, the rest of the surroundings must also be kept clean by vacuuming. Mattress can be vacuumed and sun-dried. Sun drying is one of the best ways to disinfect. It’s not that all soft toys aggravate the allergy. Those that have collected dust mites on the surface contribute to the allergy,” she says. She adds that dust mite allergy is seen largely in children below the age of two when they are not still running around. “When they start going to school, they keep themselves busy with other activities and start playing with other kids. Thus, their contact with soft toys gradually reduces,” she says.

Dr Sen also says that parents must exercise caution while giving toys to kids and they must be sure that toddlers below the age of 12 months should not keep toys next to them while sleeping. “Their nose can be blocked if the toy is coming in the way of breathing.”

Bengaluru-based Divya Somayaji says that her nine-year-old daughter’s allergy test detected dust mites as the culprits. “My daughter often used to have redness in the eyes. The eyes would become swollen and have a watery discharge. We first thought it could be an issue with the eyes and consulted ophthalmologists. We were told that she had an allergy. Eye drops helped her in relieving the symptoms. The allergic specialist we later met conducted tests and found out that it was dust mite allergy,” says Somayaji.

Somayaji is always cautious when her daughter is playing with her toys and ensures that all her toys are properly washed and kept tidy. “My daughter thankfully is not too fond of soft toys, but whenever she is playing with them, we take utmost precaution,” she says. That apart, the house is wiped every day to ensure the least exposure to dust.

Dr Sowmya Arudi Nagarajan, paediatric pulmonologist and allergy specialist, Kangaroocare hospital, Bengaluru, who is treating Divya’s daughter says that the girl is allergic to pollen and dust mites. “Dust mites are microscopic organisms that feed on human dead skin. They thrive in cosy environments like pillows, mattresses and sofa cushions. Even in the absence of actual dust, dust mites do thrive. Many people mistake dust for dust mites,” says Dr Nagarajan. She adds that it is the dust mite’s protein faecal matter that causes the allergy.

A 2011 research paper published in the journal, Pediatric Allergy Immunology, says that soft toys are a major source of house dust mites (HDM) and HDM allergens, and sleeping with soft toys is a significant risk factor for HDM sensitisation. The researchers studied three techniques to eliminate HDM from soft toys, namely freezing, hot tumble drying and washing with eucalyptus oil. The research says that, ‘thirty-six toys (12 in each treatment group) were enumerated for live HDM by the heat escape method before and after freezing overnight, hot tumble drying for one hour and washing in 0.2 percent to 0.4 percent eucalyptus oil. Freezing, hot tumble drying and washing with eucalyptus oil resulted in significant reductions in live HDM, an average reduction of 95.1 percent, 89.1 percent and 95.1 percent, respectively.’

Do dust mites hide in pillowcases and AC filters?

Dr Nagarajan says that dust mites can be found anywhere, including five-star hotels. “In some cases, we have seen allergic reactions in children as soon as they return from a holiday. Typical symptoms include sneezing and eye-watering. Pillow covers in the hotels may be changed and washed, but inside they (dust mites) would still be there as the pillows are not changed,” she says.

“AC filters, especially the ones used in cars are also sources of dust mites and they must be cleaned periodically,” says Dr Nagarajan. “The cool temperature in the air conditioner promotes the growth of the dust mites,” she adds. 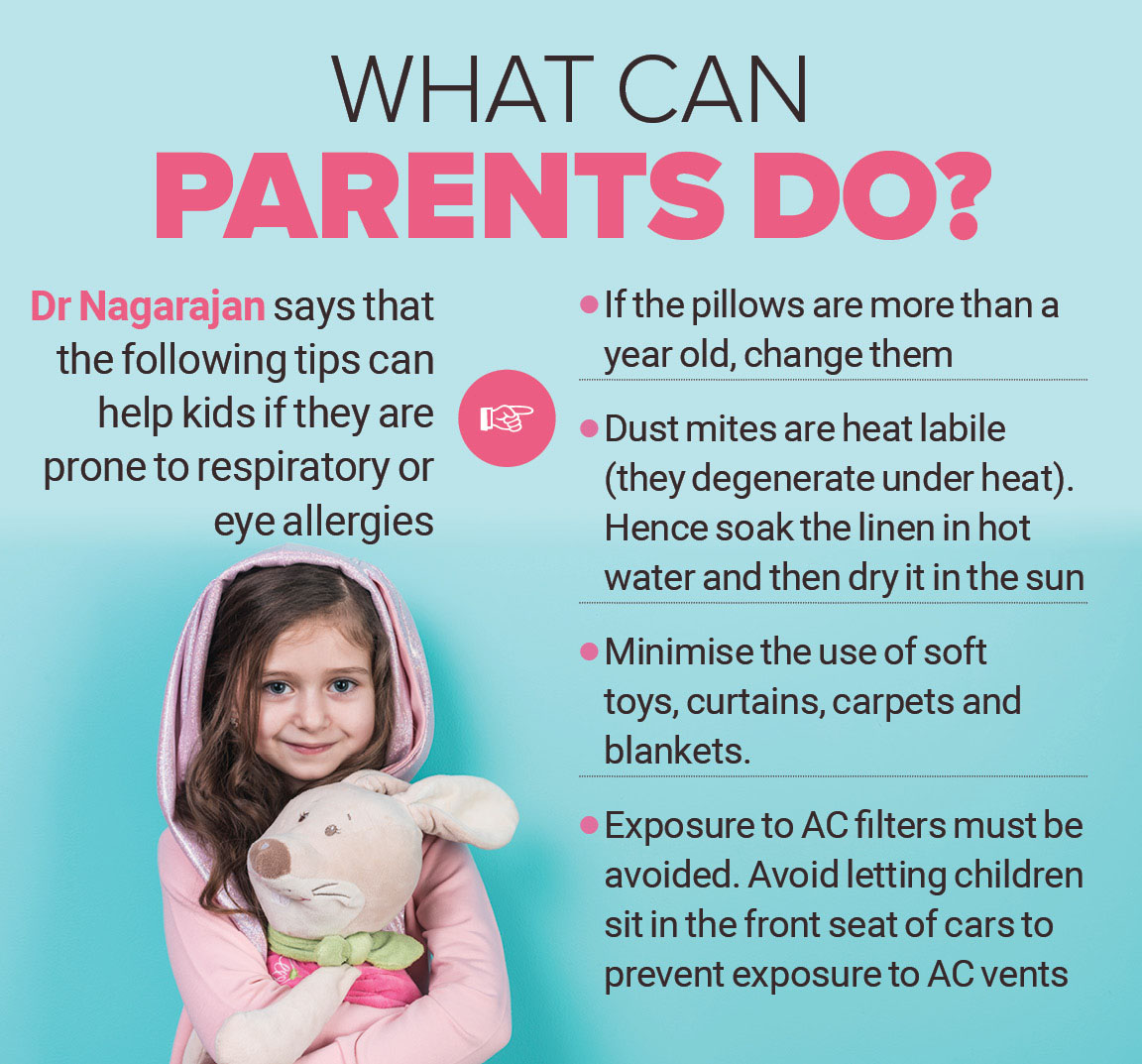 Dust mite allergy diagnosis can vary and allergy identification is always a process of elimination. “In the process of elimination, we must consider what the child has eaten or drunk, what surface the child has touched and the clothes they wear,” says Dr Sen. She suggests that the parents of kids with allergies must maintain a diary to be able to figure out what the kids have eaten and are exposed to, to find out possible allergens and triggers.

Skin prick tests are also conducted. In such a test, the person suffering from allergy is exposed to a variety of allergens or allergy-causing substances and the immediate signs seen in the form of allergic reactions are observed under medical supervision.

Parents with kids suffering from allergies do mention that frequent bouts of allergic reactions affect the child’s focus.

Agarwal says that while her son’s dust mite allergy aggravates with the change in season, it affects the boy’s concentration. “We have consulted multiple doctors. Nasal sprays help him. But we don’t know if this needs to be continued forever. We have also been exploring new therapies, like salt therapy in naturopathy. But the biggest challenge is to avoid dust,” says Agarwal. She says that despite her son’s allergies, she encourages the boy to play in mud and dirt. “That’s how he will gain immunity,” says Agarwal.