Pollen throws caution to the wind

Come February and March, the outpatient unit of the medicine department at Maulana Azad Medical College is filled with persons turning up with symptoms of sneezing, redness and irritation of the eyes, itchy throat, breathlessness, dry cough and in some cases tightness of the chest and fever.

“Every day we get ten to 15 cases related to respiratory illnesses, hypersensitivity, increased attacks of asthma, chronic obstructive pulmonary disease, skin allergy and nasal-bronchial allergy from February to April, during the wheat harvesting season when there is pollen spread,” says Dr Kumar.

According to the Asthma and Allergy Foundation of America (AAFA), people with pollen allergies only have symptoms when the pollens they are allergic to, are in the air. AAFA lists out the pollen allergy symptoms as:

Why does the immune system overreact?

Allergens trigger an immune response and cause the immune system to overreact. Pollen, which plays a vital role in plant fertilisation, released from plants, trees and weeds is one such allergen. Pollen propagates through the winds and on inhalation, it affects the person allergic to the specific allergen.

Why is pollen allergy not a problem for all? Dr Sanjay Bhatia, ENT surgeon, Fortis Hospital, Mulund, Mumbai, says that some people will have high immunological reactions to certain allergens, and they suffer. But not everyone is susceptible. “It is based on the environment, the agent and the host. If it is a specific environment and a receptive host, then the person may become allergic. When the same host goes to a different region, the allergy stops. Someone who has no allergy in Mumbai may suffer from an allergy if they go to a foreign place like Europe. The allergy may not be identified in one place, but in another location, it may get picked up. And the allergies are usually seasonal, during the fall and summer,” says Dr Bhatia.

While pollen allergy does not affect everyone, it is prevalent in two percent of the population, says Dr Kumar. “Especially those with pre-existing childhood allergies are more vulnerable to pollen allergy. The other factors are hypersensitivity, family history of hypersensitivity and inherent problems in the immune system. Dysregulation of the immunity of T cells (white blood cells that play a key role in the immune system) may be related to this. Pollution levels are very high in Delhi and that also can be a contributing factor. Children, young adults and older patients are more susceptible to pollen allergy,” says Dr Kumar.

According to Dr Vasunethra Kasargod, a pulmonologist from Bengaluru, the most common pollen allergy seen in Bengaluru is due to a grass weed called Cynodon Dactylon and a weed called Parthenium. “Pollen is produced from flowers. The flowers can be from trees, grass or shrubs. It (pollen) is rampant in Bengaluru, especially because of the windy conditions that facilitate its propagation,” says Dr Kasargod.

Geography also matters in allergic reactions, says Dr Kasargod. “The plant Cassia Fistula which is rampantly seen in Bengaluru is not seen much in Mumbai and Delhi, and hence the geographical locations of certain plants in certain areas also need to be factored in pollen allergy,” he adds. 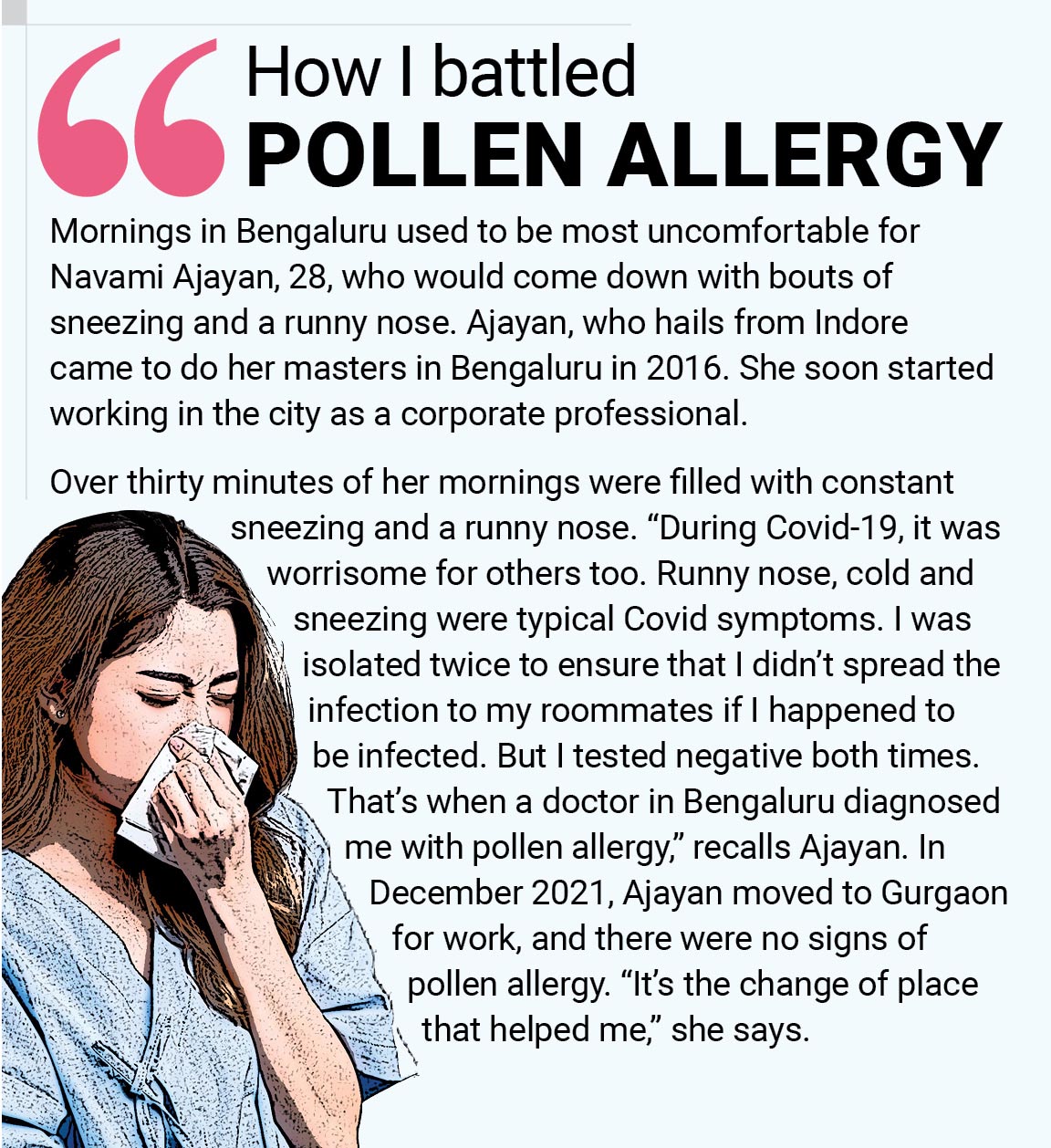 Dr Kasargod adds that the majority of those suffering from pollen allergy experience symptoms in the early morning hours (5 am to 8 am) and some notice the symptoms in the evening also. That’s the time when the pollination is at its maximum.

Dr Kasargod recounts a case study when a 28-year-old man, a techie working in Bengaluru suffered from a pollen allergy which led to asthma. He was concerned when he had to relocate to Canada in the later part of 2021. “He was concerned as he had asthma and he had to move to a country known for its cold climate. He came to me asking for precautionary measures. However, to his surprise, when he moved to Canada, he showed no signs of such an allergy, which indicated the absence of exposure to the allergens in Canada,” says Dr Kasargod, who had treated the man in Bengaluru.

Doctors do advise those vulnerable to allergies to prepare ahead of the allergic season. “I suggest nasal sprays and anti-histamines ten to 15 days before the season of allergies, as directed by the physicians,” says Dr Bhatia.

Watering of the eyes and in some cases, swelling of the lips are also seen along with other typical symptoms like sneezing.

“While a complete cure is difficult, some can remain allergic throughout their lives, and it may stop only when their exposer to the allergen stops,” says Dr Kasargod.

“If a person is allergic to a particular allergen, it remains the same. Only when the person is out of the trigger area, there will not be an allergic reaction. The best thing to do is to avoid the trigger by not going out much during the allergic season, keeping the clothes separately after coming home, using air purifiers and using high-efficiency particulate air (HEPA) filter at home. Wearing a mask during the triggering time also helps,” says Dr Bhatia.