Home
Articles
Time to set your heart on the lungs
0

Time to set your heart on the lungs

The heart and lungs are dependent on each other. Disturbance in one organ affects the other and the symptoms can often be misleading 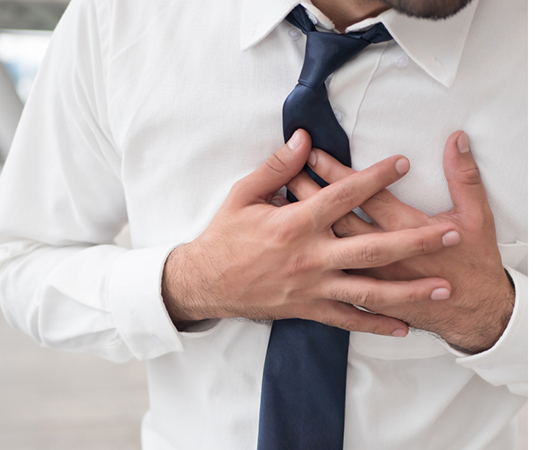 It was around midnight on June 21 when 75-year-old Hanumanthaiah started having breathing difficulties. He was rushed to a neighbourhood government hospital in Bengaluru and was referred to another hospital that specialised in chest diseases for lung issues. There, he was told that the symptoms he faced was primarily related to the heart. The man was then shifted to Sri Jayadeva Institute of Cardiovascular Sciences and Research (SJICSR) where he was diagnosed with left heart failure.

Gopal G recalls the trauma the family went through when his father fell sick. “He had difficulty breathing, which was presumed to be a matter of the lungs. We had to shift him to three different hospitals one after another before the right diagnosis was made. He was discharged after a six-day treatment from SJICSR.”

“It was an acute problem in the heart manifesting typical respiratory symptoms,” says Dr C N Manjunath, director, SJICSR whose team handled the case. According to Dr Manjunath, when the left heart fails, either due to heart muscle disease, valvular heart disease or long-standing high blood pressure, the symptoms will be shortness of breath and tiredness. He explains that when there is an acute and sudden rise of pressure in the lungs due to left heart failure, the affected persons will not be able to breathe, which leads to a condition called ‘cardiac asthma’ or ‘pulmonary oedema,’ an acute condition caused by the accumulation of fluid in the lungs. “Cardiac asthma is very different from bronchial asthma which is allergic asthma unconnected to the heart. But cardiac asthma also has symptoms like cough, breathlessness, wheezing just like bronchial asthma,” he says.

Dr Sundeep Salvi, pulmonologist and director, Chest Research Foundation, Pune, explains the typical scenario of left heart failure. “When the left side of the heart is not pumping properly, back pressure is built on the lung blood vessels and capillaries. This leads to fluid oozing out into the lungs and a condition called pulmonary oedema. This manifests as cough, shortness of breath and phlegm which is often pink and frothy. The rupture of the capillary blood vessels due to high back pressure from the heart leads to blood leaking inside alveoli (air sacs in the lungs),” says Dr Salvi.

Dr Manjunath says that in the Outpatient Departments (OPD) of cardiac super speciality hospitals, 20-25 per cent of the cardiac patients suffer from lung issues as well. Simply put, one in four persons with cardiac issues have lung symptoms.

According to a study published in the Journal of American Medical Association (JAMA), the relationship between the heart and lungs in disease is important and interesting, though often neglected. “These vital organs are more intimately associated than most other structures in the body, for not only are they interdependent functionally, but they are actually in contact anatomically, only the delicate tissue of the pleura and pericardium separating them. Thus, not only will derangement of the function of one organ affect the other, but disease or disturbance of structure of the one is apt to spread by contact to the other, or at least to displace it,” says the study.

“Both the heart and lungs have to work in tandem. When one organ gets affected, the repercussions are seen in the other,” says Dr Manjunath, explaining the link between the two organs.

The lungs nourish the blood with oxygen. The purified blood comes to the left side of the heart from where it is pumped to all the organs of the body. The right side of the heart is connected to the lungs and carries deoxygenated blood. Dr Salvi says that the lungs and heart work in tandem. “The lungs soak in the oxygen present in the air and deliver them to the heart, which pumps the oxygen to all organs of the body. The heart in turn collates the deoxygenated blood and pushes it into the lungs for purification,” says Dr Salvi.

“The human body needs 1000 litres of oxygen every day. And a significant part of it is utilised by the heart, as the heart needs the energy to pump blood. If the lung is diseased, the heart starts getting lesser and lesser oxygen and therefore its pumping function becomes weaker,” says Dr Salvi.

“In case there is any disease on the left side of the heart, there will be back pressure in the lungs, (as the purified blood comes to the lungs from the left side of the heart). This leads to a condition called ‘pulmonary venous hypertension.’ Once the pressure in the lungs increases, the air sacs become filled with fluid and this manifests in lung symptoms like shortness of breath, tiredness and fatigue. That way, the respiratory system is affected due to a primary heart issue,” explains Dr Manjunath.

On the other hand, decreased blood flow to the lungs due to defects in the heart in the form of large heart holes and narrowing of the valves lead to a condition called ‘blue baby syndrome,’ which presents with bluish discolouration of the skin.

Pulmonary venous hypertension can lead to pulmonary congestion. “Pulmonary congestion means accumulation of fluid in the lungs. In such cases, the requirement is to reduce the pressure on the left side of the heart with medicines. Or the problem in the valve needs to be corrected by procedures such as balloon valvuloplasty or valve replacement surgery. The valve can have two kinds of problems – either narrowing or leakage,” says Dr Manjunath.

Dr Manjunath points out that if the mitral valve is narrowed, there won’t be easy emptying of the blood from one chamber to another. He compares it to a dam during the rainy season. “If there is copious rain in the catchment area and the gates of a dam are closed or have blockages, a lot of water gushes backwards. That is exactly what happens in the lungs too,” Dr Manjunath explains.

Dr Salvi says that pulmonary hypertension is very difficult to diagnose. It’s done by inserting a catheter from the femoral vein (blood vessel in the thigh), pushing the catheter up to the right side of the heart and measuring the pressure. “It’s an invasive procedure. To confirm the diagnosis, this procedure called right heart catheterisation is done. Another (indirect) way of diagnosing pulmonary hypertension is to do a 2D echo.”

Pulmonary hypertension is seen among people with chronic obstructive lung disorder, and they are vulnerable to heart disease. “When the pulmonary artery pressure increases, the heart has to pump forcefully against the higher resistance. The heart tires and this can lead to heart failure and heart attack,” says Dr Salvi.

For some, the respiratory symptoms can worsen at night. “When a person is sleeping, there will be reabsorption of body fluid into the vascular system and it leads to additional load on the heart. This is the typical symptom of left heart failure, where persons affected persons get up within one or two hours of going to bed and later feel comfortable while sitting or standing. “We ask the people if they face any breathing difficulty while sleeping and if they are comfortable when they stand. If so, it implies that the patient’s symptoms are cardiac related,” says Dr Manjunath. 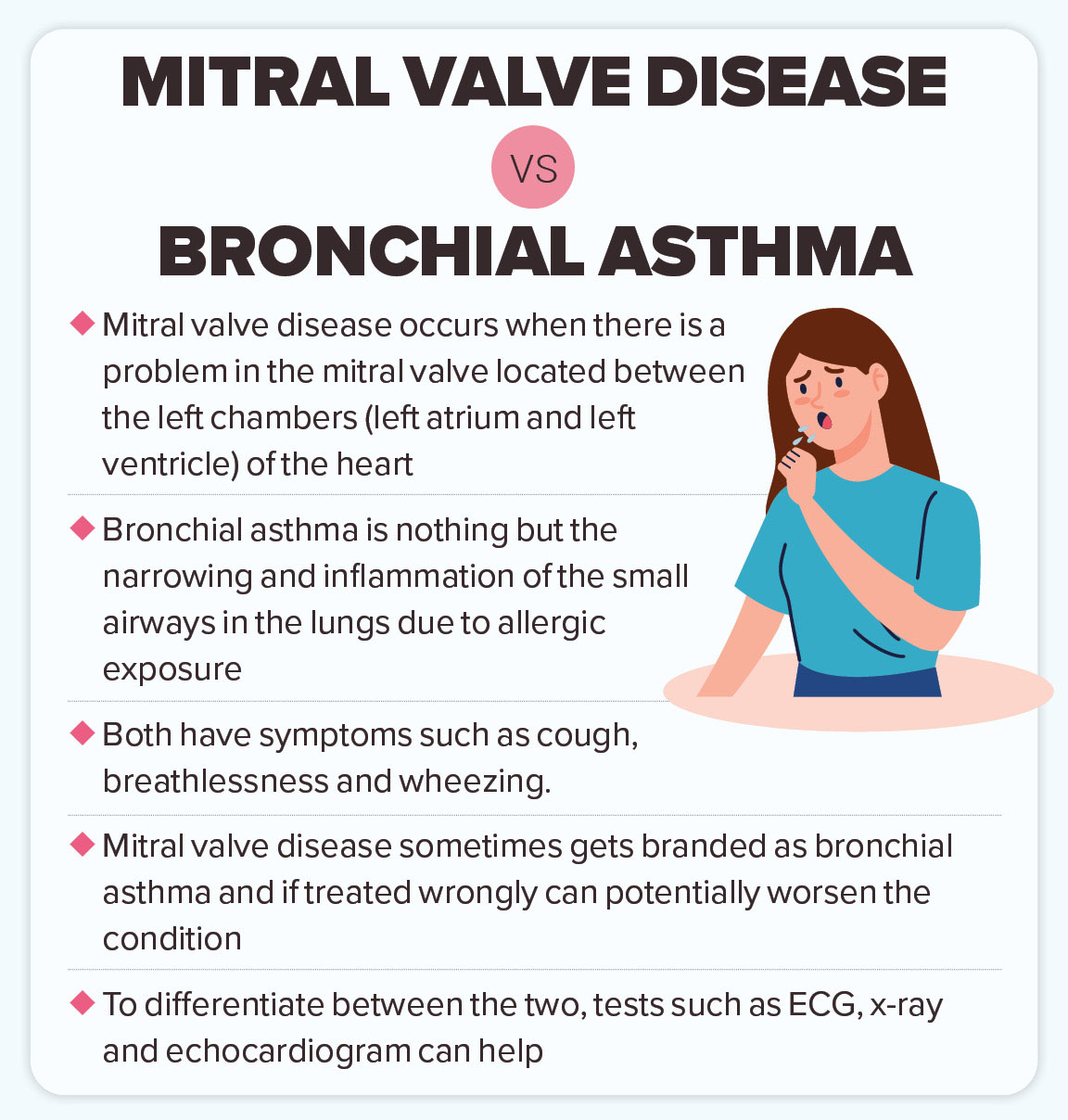 Hole in the heart and respiratory infections

Dr Manjunath points out that children born with a hole in the heart have recurrent chest infections, like fever, cough and pneumonia apart from stunted growth.