Does diabetes cause irregular periods? 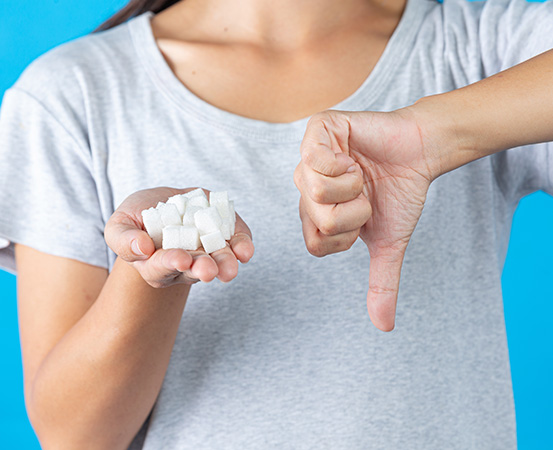 Having regular periods is a sign of normal health but diabetes could disrupt it and make menstruation challenging. Diabetes increases the chances of developing irregular and longer periods because of hormonal imbalance.

Dr Basavaraj GS, consultant – diabetes & endocrinology, Narayana Health City, Bengaluru, says that menstrual health can get affected when it is associated with chronic diseases and co-morbidities like diabetes. “Diabetes can lead to menstrual irregularities. It can cause longer cycles, longer menstruation, PCOS and anovulatory (no ovulation) cycles,” he points out and highlights the two-way link between diabetes and menstruation. During periods, the sugar levels go up and once menstruation is over, the sugar levels drop.

What sweating can tell you about sugar levels

According to experts, type 1 diabetes can also cause anovulation (when an egg is not released properly from the ovary) due to an imbalance in estrogen and progesterone levels. “There may also be an increased risk of early menopause,” says Dr Astha Jain Mathur, consultant – obstetrics & gynaecology, Motherhood Hospitals, Indore.

Priyanka Mehta (name changed), a 35-year-old homemaker in Indore, started facing menstrual irregularities when she turned 30. She has type 1 diabetes. “My periods would delay for almost two to three months. I wasn’t aware that diabetes could affect my period cycle until I visited the doctor,” she says.

She adds that she never used to monitor her sugar levels as they were checked during her regular check-ups. But she is now more aware and has changed her eating habits to manage diabetes better.

Irregular menstruation could indicate diabetes, if not diagnosed. According to the study, ‘Associations of Menstrual Cycle Characteristics Across the Reproductive Life Span and Lifestyle Factors With Risk of Type 2 Diabetes’ published in 2020 in JAMA Network Open, irregular and long menstrual cycles across the reproductive life span were associated with a greater risk of type 2 diabetes. It says the risk is higher among women with obesity, low-quality diet and low levels of physical activity.

However, Dr Mathur says that irregular periods cannot alone be an accurate indication of diabetes. “There could be many other reasons for irregular periods. Some people with prediabetes or type 2 diabetes, may not have symptoms.”

Dr Mathur points out that type 2 diabetes is also linked with an increased risk of endometrial cancer. “The risk increases if a person is obese,” she says.

In type 2 diabetes, people are more prone to developing menstrual abnormalities due to weight gain. “They may have lesser menstrual bleeding. Due to more insulin resistance in the ovaries in women, they can develop PCOS during the initial part of their reproductive cycle, leading to gestational diabetes and menstrual abnormalities,” says Dr Basavaraj.

Sonal Agarwal, a 32-year-old operations executive in an IT company in Bengaluru, was diagnosed with type 2 diabetes when she was 28. She says diabetes has not affected her menstrual health until recently. Though she has regular periods with regular bleeding, she admits that her periods have gotten very painful. She says, “Earlier, I would not even realise any pain before or during periods. But now, I get bad body pain, lower abdominal and back pain, three days before my period and it lasts two days after my period ends. I have mild PCOS as well.” She has sugar levels under control and also manages sugar cravings quite well. “If I have sugar cravings before or during periods, I consume dates. That helps,” she says.

If a woman is also suffering from PCOS, managing diabetes can get more difficult. She would require a lot of lifestyle changes and constant motivation. Dr Basavaraj says, “Many drugs cannot be prescribed to a person with both PCOD and diabetes, complicating the treatment.”

Menstrual problems like pain, abnormal bleeding and amenorrhea (absence of menstruation) usually occur in women in their 20s and 30s, says Dr Mathur.

Dr Basavaraj says, “When a woman has a menstrual cycle longer than 42 days or six to eight weeks or has periods for more than seven days with significant bleeding, then it is a matter of concern.”

It is important to contact the doctor in case of some serious symptoms:

A rise in progesterone before periods can trigger food cravings and may make one lose motivation to work out, which can further lead to a rise in sugar levels. Dr Basavaraj says that cravings are natural, but they spike sugar levels. “There is no need to suppress cravings. They need to be understood and managed well instead,” he says.

Tips to manage cravings during periods

How to improve menstrual health if you are diabetic

The formula for better menstrual health is to manage diabetes well. Here are some of the ways that will help keep sugar levels under control:

Diabetes can make menstruation more challenging due to an imbalance in the levels of estrogen and progesterone. It can cause longer cycles, longer menstruation, PCOS and anovulatory (no ovulation) cycles. The menstrual cycle can get longer than 42 days or six to eight weeks. Uncontrolled sugar levels can also cause periods that lasts longer than seven days with significant bleeding.

Women with type 1 diabetes are more prone to developing menstrual irregularities due to uncontrolled sugar levels, insulin dependency and low BMI. If a woman is also suffering from PCOS, managing diabetes and menstrual health can get more difficult.