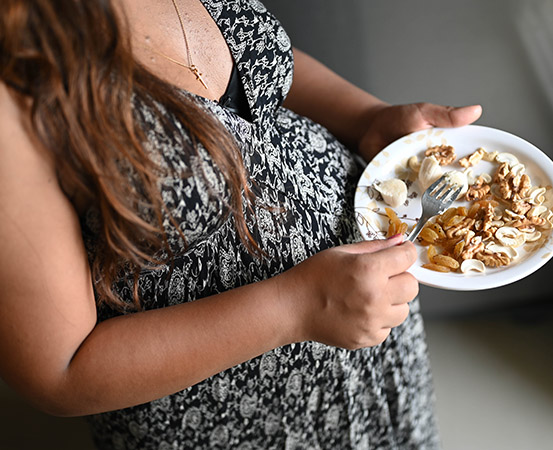 Kavitha (name changed), a 32-year-old professional who works in the Hindi film industry in Mumbai, was diagnosed with gestational diabetes during her second pregnancy.

“My gynecologist advised me to reduce my carbohydrate intake and increase the portion size of leafy vegetables and sprouted green grains in my diet,” she says. “I was instructed to go for a daily 30-minute stroll. I followed these instructions religiously, and my blood sugar levels improved suddenly. This outcome probably helped me to avoid medication. My blood sugar levels were normal during the second check-up. And I had a normal delivery.”

What sweating can tell you about sugar levels

Does diabetes cause irregular periods?

Gestational diabetes and its impact on both maternal and neonatal health is the main reason blood-sugar management has emerged as a top medical priority during pregnancy.

Insulin resistance or reduced insulin production can cause gestational diabetes. Obesity, a family history of type 2 diabetes, and having polycystic ovarian syndrome are among the other factors that increase the chances of developing gestational diabetes mellitus (GDM) during pregnancy.

Screening for GDM is advised during 24 to 28 weeks of gestation for women at normal risk; those at high risk are typically examined during the first prenatal appointment.

GDM increases the risk of preeclampsia, premature birth and excessive foetal growth, which can lead to complications during labour and delivery for both mother and child, such as birth lacerations, Caesarean section and neonatal problems.

Two types of diabetes have a connection with pregnancy:

Dr Reji Divakar, obstetrician and gynecologist, Caritas Multi-speciality Hospital, Kottayam, Kerala, tells Happiest Health his first advice to a woman with GDM would be to limit her intake of sweets, sugar and carbohydrates. “Also, we insist on routine exercise,” he says. “Because the problem is if the mother’s blood sugar remains uncontrolled, the baby’s birth weight may increase. It can also lead to a rise in the mother’s blood pressure and increase in amniotic fluid. and increase the risk of bleeding during delivery.”

Physical activity and diet modification are the best lifestyle changes to make during pregnancy, according to Dr Chitra Devi, senior consultant gynecologist at Suraj Hospital in Chennai. “Specifically, we suggest daily walking for at least 40 minutes and upper-body exercises,” she says. “For diet modification, we suggest avoiding junk food and oily foods, and increasing the intake of green leafy vegetables and healthy foods.”

Dr Chitra says all these lifestyle changes and weight loss must be advised prior to pregnancy, during the preconception counselling. “This is important because normal deliveries among women with GDM may be slightly more difficult than in those without,” she says.

Also important are the preparations before pregnancy to reduce weight, essentially to avoid weight-loss efforts and exercise during pregnancy. This strategy is recommended for women who want to become mothers because it helps the body use insulin better and keeps blood glucose levels normal.

Moreover, during pregnancy, women should gain weight for the baby to be healthy. At the same time, gaining too much weight in a short span of time also increases the chances of developing gestational diabetes.

Managing blood sugar is of prime importance during pregnancy. Manifestation of diabetes during pregnancy is called gestational diabetes. This version of diabetes could eventually develop into full-blown type 2 diabetes in a number of women if they don’t adopt a healthier lifestyle and diet. Gestational diabetes also poses risk to newborn babies since, experts say, they could have a greater risk of getting affected with multiple cardiovascular conditions, including hypertension.