Home
Articles
Is your child a particularly fussy eater?
1

Is your child a particularly fussy eater?

A child’s consistent tantrums during mealtime can bother parents. But doctors say it’s not just about being fussy, it could be a lesser-known disorder 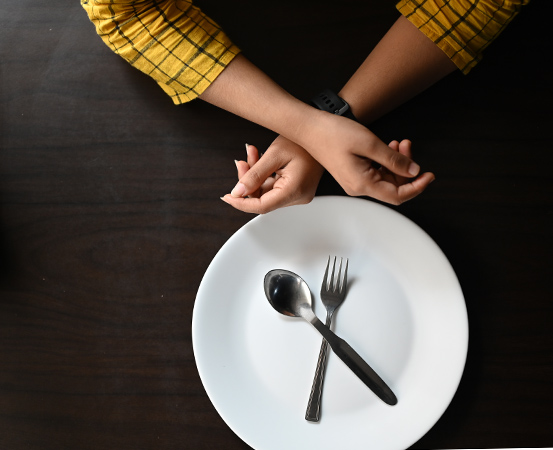 Kids who strongly avoid a certain category of food, are very choosy about food textures and smell. They take a longer time than usual to finish their meal and resist eating at restaurants or with the rest of the family. But they may not just be difficult kids or fussy eaters. They could be struggling with an eating disorder called avoidant/restrictive food intake disorder (ARFID).

According to the Diagnostic and Statistical Manual of Mental Disorders (DSM), a handbook published by the American Psychiatric Association (APA), widely used by clinicians and psychiatrists to diagnose psychiatric illnesses, AFRID is an eating or feeding disturbance manifested by persistent failure to meet appropriate nutritional and/or energy needs. That is an apparent lack of interest in eating or food, avoidance based on the sensory characteristics of food and concern about aversive consequences of eating.

It can affect the growth of children as they miss out on many important nutrients and can consequently affect their mood, behaviour and energy levels. As they grow older it can also impact their social life. Additionally, the disorder can co-occur with an anxiety disorder and can make the situation a bit complicated to handle.

“The challenges and difficulties around child feeding can become overwhelming for parents,” says Dr Wilona Annunciation, a consultant psychiatrist from Mumbai.

Understanding the basis of this feeding disorder, warning signs and treatment options can support parents and caregivers who are raising a child with the condition, says Dr Annunciation.

What are the odds?

A longitudinal study of malnutrition and psychopathological risk factors was conducted on 113 children aged between two and 11 years in an Italian paediatric hospital in Rome in 2018. The children were originally diagnosed with Infantile Anorexia (IA), a food refusal condition in children between the age of six months and three years.

The results revealed that 73 per cent of children continued showing mild to moderate to severe malnutrition at 11 years with increasing internalising and externalising emotional/behavioural problems, thus indicating a significant risk of developing an eating disorder like ARFID during the critical developmental period of adolescence.

Speaking to Happiest Health, Dr Kishore Kumar, senior consultant, neonatologist, paediatrician and founder chairman of Cloudnine Hospitals India, says that there are a lot of hypotheses and studies revolving around ARFID but none have been proven on a larger population scale.

Coping with food: from a few bites of fruits a day to proper meals

Dr Annunciation mentions the case of a 12-year-old girl diagnosed with ARFID, who she is currently treating. “The girl was unwilling to eat any form of solid or liquid food to avoid becoming fat. Her weight was below the normal range at 23 kgs when she started treatment,” Dr Annunciation tells Happiest Health.

After a detailed history and clinical examination, Dr Annunciation advised her of a change in medication and monitored her weekly. After a few adjustments in the medication dose, and parental counselling the child has now increased her food intake.

Dr Annunciation also monitors the daily food report that her mother sends. “The food intake has changed from only water with a few bites of fruit to some smoothies and gradually proper meals although it is still limited in quantity. The child’s weight is now 25 kgs,” said Dr Annunciation. The girl has been introduced to an individual art-based therapy that involves the use of visual arts material to engage her emotions and thoughts. Besides, her monthly visit to the doctor is also continuing.

According to Dr Kumar, most ARFID cases in kids don’t go to very extreme levels due to the diligence of parents who see a paediatrician in time and encourage kids to eat well.

The Diagnostic and Statistical Manual of Mental Disorders, in its revised latest version, want to ensure that children aren’t overdiagnosed. Dr Kumar points out that the earlier version of DSM was more inclusive in terms of criteria for ARFID diagnosis but the latest one is more stringent, exonerating most kids from the ARFID bracket. “Although the cases have come down to almost nil from two to three per month, we often get children with similar symptoms and significant eating disturbances which cannot be overlooked,” he adds.

Is ARFID only psychological?

Dr Annunciation says that ARFID is an eating disorder and frequently co-occurs with other conditions, such as autism spectrum disorder (ASD), attention-deficit/hyperactivity disorder (ADHD) and obsessive-compulsive disorder (OCD). It could be considered a psycho-somatic illness in the sense that psychological concerns impact bodily functions.

An article published in 2017 in the journal, Current Psychiatry Reports mentions three primary ARFID presentations that hint toward the condition being beyond only psychological in kids.

Fear of aversive consequences:  If the child has choked earlier on some food or has had a bad stomach infection or has seen somebody else suffering due to that food item, he/she develops an aversion to it.

“It is more of a psychosocial disorder and not just psychological,” says Dr Kumar.

Delving deeper into the ‘why’ of the first two presentations, Dr Kumar says the most possible cause could be the lack of familiarity with food. He says kids develop a natural liking towards the food which their mother had during pregnancy and vice versa. Kids are also genetically predisposed to sweet foods as compared to sour foods and curries.

“A child who is already predisposed to ARFID due to biological or genetic makeup may be triggered by environmental or psychosocial situations,” she adds.

The role of parents

Dr Kumar says the period between nine to 18 months is when the child is most psychologically explorative. The parents can leverage this time to familiarise their kids with various kinds of foods.

The idea is to be patient and persistent with the child without forcing them and try and be innovative in serving varieties of food instead of opting for shortcuts like ready-made foods and letting the child get used to only those, says Dr Kumar.

“However, if the child is very insistent on eating only one type of food and refuses to taste any other food after 15-18 months, parents should see a doctor,” points out Dr Kumar.

According to Dr Kumar, the treatment involves nutritionists and ‘play’ therapists. The nutritionist helps parents with innovative recipes to ensure the child is getting adequate nutrition and play therapy involves guiding parents on how to make meal times more fun and a family affair where the child feels happier and is motivated to emulate others and eat well. He adds that medications are only required to treat medical conditions like oesophageal reflux, celiac disease and irritable bowel syndrome that trigger ARFID.

“Treatment requires highly specialised care with a team involving a psychiatrist, a psychologist and an occupational therapist,” says Dr Annunciation.

Dr Kumar has these words of assurance. He says if the eating disturbance is not associated with any specific medical condition or any extreme aversion to a specific food, the condition is considered psychosocial and phases out after childhood years.