Home
Articles
The will to survive became his Perth-right
0

The will to survive became his Perth-right

Chronic kidney disease is a condition that is characterised by a progressive loss of kidney functioning. Dialysis or kidney transplant are the options that people can opt for

Sumeer Kumar is living with four kidneys. He had to undergo a kidney transplant twice because of chronic kidney disease or CKD, a condition where kidneys get damaged and do not filter blood properly. Despite the challenges he has faced in his life, the 48-year-old from Chennai has been an inspiration to many.

From an active cricket player, he chose to work as a strength and conditioning trainer when renal troubles cropped up. Kumar had his first kidney transplant through a cadaver donor, from a *brain-dead person in 2015, after being on dialysis since 2012. 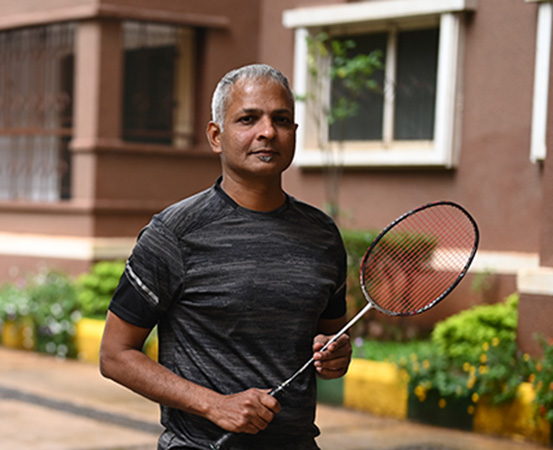 (*A person is certified as brain (brain stem) dead when the brain functioning stops and is permanent and irreversible. However, in such cases the vital organs such as the heart, kidneys, liver, pancreas and lungs can be kept functional with an artificial life support system for a few hours to a couple of days.)

The father of two, faced renal failure once again post-transplant in 2019 and was back on dialysis; his doctors suggested he explore the options of renal transplant yet again. In September 2019 Kumar’s friend came forward to donate a kidney and he underwent a second kidney transplant.

Kumar considers himself fortunate when many with CKD are waiting for a kidney from relative donors or through cadaveric donations.

CKD occurs with progressive loss of kidney function in filtering the blood, says Dr Sankaran Sundar, a Bengaluru-based nephrologist and the ex-chairman of the Indian Society of Nephrologists. He adds that CKD was always seen as a silent killer, and there is still a need to create more awareness. It presents in different forms. By the time the affected person reaches the nephrologist, it’s too late, in some cases.

In the early stages of CKD, one might have only a few signs or symptoms, says Dr Anand Reddy, clinical associate professor (internal medicine), Texas Tech University of Health Sciences and nephrologist and director of Permian Basin Kidney Centre, Texas, USA. He adds that a person might not realise that s/he may have kidney disease until the condition is advanced, leading to loss of kidney function, depending on how severe it is. He lists out the following symptoms:

Dr Reddy adds that the signs of kidney disease are often nonspecific. “This means they can also be caused by other illnesses. Because the kidneys can make up for lost function, the affected person might not develop signs and symptoms until irreversible damage has occurred,” he says.

However, there can be hints of kidneys being vulnerable, says Dr Sundar giving tips for early diagnosis. “The moment a person is diagnosed with high blood pressure by a general physician, s/he must get the kidneys checked. Anyone with a family history of diabetes and hypertension should get their kidneys checked. That’s the only way for early diagnosis,” he tells Happiest Health.

From his experience of working as a nephrologist in the US and India, Dr HS Sudarshan Ballal, chairman of Manipal Hospitals, Bengaluru, says that those affected by kidney disorders in India go to doctors much later and they are younger when compared to the US. “People usually get their blood sugar and cholesterol checked but they don’t do creatinine and urine analysis. CKD is by and large silent, and hence unless you look for it, it doesn’t get diagnosed. Even the doctors were not much aware of kidney issues earlier and diagnosis used to get delayed. But things have changed now gradually,” said Dr Ballal.

CKD: When to consult a nephrologist for your kidney

The eGFR depends on the body weight, age and creatinine levels in the blood. Dr Sundar points out that the diagnosis can be tricky. “Suppose the eGFR is 59, it gets labelled as CKD. If the same person drinks more water and reduces weight, the eGFR can reduce. Hence, eGFR alone is not the ideal way to determine CKD.  This needs to be discussed with the person’s family in detail,” says Dr Sundar.

Just one lab report indicating low eGFR should not make a person worry unnecessarily, says Dr Sundar. “One must not get perturbed by the lab reports and it should be a nephrologist who should evaluate it,” says Dr Sundar.

What are the signs of chronic kidney disease or CKD?

According to Dr Ballal, the detection of kidney diseases is easy now, as the test results of blood, urine and hypertension give a hint. “I suggest that anyone with obesity, hypertension or diabetes, must closely watch their kidney health. Including kidney health in routine tests after the age of 40 is advised,” says Dr Ballal.

He further adds that people with diabetes usually consult ophthalmologists because diabetic retinopathy is an issue. “But that’s when their renal issues get traced. I get more referrals from ophthalmologists than from general physicians,” says Dr Sundar.

Puffiness of the face, swelling in the lower eyelids and feet, and passing more urine are typical signs of kidney damage. It’s a myth that only less urine output is a problem; passing more urine or polyuria is also a sign of kidney damage. Depending on the fluid intake and weather conditions, an adult passes three to four litres of urine every day.

“Every day, 200 litres of fluid is filtered by the kidneys. Out of these, 197 litres are reabsorbed. If the kidneys fail and it can’t reabsorb even ten per cent of what it has to absorb, the person would pass 20 litres of urine,” says Dr Sundar.

Blood in the urine and pain during urination are also warning signs, says Dr Sundar.

Based on the eGFR there are five stages of kidney disease. The last stage (when the eGFR is below 15) is called end-stage kidney disease; dialysis becomes inevitable here. The only other option is a kidney transplant for which a healthy kidney from a matching donor or a brain-dead person can be donated.

Is diabetes under control easily? Check your kidneys

If the sugar levels are easily getting controlled in those who are diabetic for over 20 years and are insulin-dependent, then that’s not a sign of relief, but a sign of kidney damage, says Dr Sundar.

Dr Sundar explains that one of the functions of the kidneys is the destruction of hormones, especially insulin. “Kidney makes hormones like erythropoietin but also destroys the hormones. Forty per cent of the insulin produced by the body is destroyed by the kidneys. If there is a problem with the kidney, destruction of insulin does not happen much and the insulin level does not decline,” says Dr Sundar.

He further adds that if a diabetic person gets frequent hypoglycaemic (low sugar) attacks and if the insulin requirement and anti-diabetic medications are coming down, he/she must check for protein leaks. “If the sugar is controlled easily, it may be a sign of kidney damage, which I see quite often in my practice,” says Dr Sundar.

According to Dr Reddy, an important aspect of treatment is to delay the progression of chronic kidney disease and in some cases, reversibility is an option. He lists the following measures to prevent renal failure:

Every time the heart pumps, 25 per cent of the blood (cardiac output) flow goes to the kidneys. Hence, kidney damage or CKD also increases the risk of cardiovascular diseases and stroke.

Kumar also suffered from cardiac complications. When he was waiting for a second kidney transplant, Kumar underwent emergency open heart surgery for aortic dissection (tear in the wall of the aorta) for which he was hospitalised for 55 days and underwent multiple critical surgeries. After his cardiac issues settled, he underwent a second kidney transplant when his friend, a matching donor generously donated a kidney in September 2019.

But life didn’t bring him down. Post recovery, within three months of his second kidney transplant, he took part in the ten-kilometre Skechers Performance Chennai Marathon which got him into the Asian book of Records and the Indian Book of Records. He became the first two-time kidney transplant recipient for taking part in a running event within 100 days of surgery. He is yet to get back to his actual work in fitness training. However, he has been continuing with his voluntary work in spreading awareness about renal health among school students and the public at large via the Kidney Warriors Foundation, a not-for-profit entity formed by and for those suffering from renal issues.

“I believe in preventive health care and that’s exactly what I am working on,” says Kumar whose work involves creating awareness of lifestyle diseases which are the main contributors to kidney diseases. He acknowledges the support he has received immensely from his wife, Mary Ann and his kids.