When bitten by a snake but not sure what kind it is, treat it as a venomous one 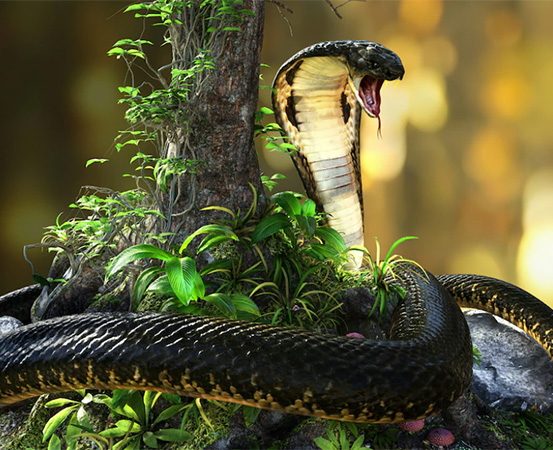 Every year, over 5.4 million snake bites occur across the globe, of which 1.8 to 2.7 million persons are bitten by poisonous snakes or suffer from envenoming. That’s as per the World Health Organisation’s data on snakebites.

Experts say when a snake is spotted, the wise thing is to slowly move away and not provoke or kill it. According to the WHO, globally, there are between 81,410 and 137,880 deaths and around three times as many amputations and other permanent disabilities.

Not all snakebites are fatal

Fifty-three-year-old Ramesh, who hails from a village near Haveri, Karnataka, recalls his snake bite experience. One morning (June 2021), while cleaning his garden, he found a snake hiding behind flowerpots that he was trying to move. “As soon as I moved the pot, I saw the snake. But as a reflex, I moved my hand towards it to shoo it away and that’s when I was bitten. I panicked and thought I would die,” Ramesh tells Happiest Health. He screamed for help and a passer-by came to his rescue, tied his hands with a cloth and asked him not to move his hand.

Ramesh started to feel dizzy and even started vomiting. “I was shifted to a local government hospital where the doctors injected me with anti-snake venom serum and saved my life,” he says.

Authors of the article titled, ‘Trends in snakebite mortality in India from 2000 to 2019 in a nationally representative mortality study’, state that India had 1.2 million snakebite deaths (average 58,000/year) from 2000 to 2019. The article says that the risk of an Indian dying from snakebite before the age of 70 is about one in 250, but notably higher in some areas.

Dr J Satyanarayana Rao, senior general physician, Kamineni Hospital, Hyderabad says that there are two types of snake bites – neurotoxic and vasculotoxic, and both can be fatal. “Signs of neurotoxic bites are a burning sensation, puking, weakness in legs, drooping of eyelids, ophthalmoplegia (paralysis of muscles within or surrounding the eyes), breathlessness, collapsing and respiratory arrest. Vasculotoxic bites present with pain at the bite point, swelling, collapsing, puking and renal failure.”

Dr Rao points out that immobilisation of the patient is necessary and immediate transportation to the medical facility is needed. “One must not burn the part of the body bitten by the snake to close the wound. Unfortunately, the process of cauterisation is still used as first aid, due to a lack of awareness. The same goes with tourniquet operation, an old method used to stop the blood flow through the veins by applying pressure using a cloth or a bandage,” he says.

“Administration of anti-snake venom (ASV) as early as possible and probative measures like consolation, pain relief, and treating with proper fluid and electrolytes are needed. If there is acute renal failure, haemodialysis is suggested and mechanical ventilation is needed in case of respiratory failure,” says Dr Rao.

Dr Nikhil Paul, assistant professor, emergency medicine, Sree Gokulam Medical College & Research Foundation, Trivandrum, says that usually all patients with confirmed or suspected snakebite should be admitted and kept under observation for 24 hours. “Provide first-aid measures and supportive measures immediately. Closely monitor for signs of envenomation. If there are signs of envenomation, administer ASV therapy as soon as possible. Many species, particularly the krait and the hump-nosed pit viper are known for delayed appearance of symptoms which can develop after six to 12 hours,” he says.

Paul who is also part of the Association of Emergency Physicians of India explains that the 20-minute whole blood clotting test is a reliable bedside test that can be carried out in any hospital. “Take a dry glass vessel preferably a test tube and place a few millilitres of fresh venous blood and leave it undisturbed at ambient temperature for 20 minutes. After that, the tube should be gently tilted to detect whether the blood is still liquid or uncoagulable. The test should be carried out every 30 minutes from admission for three hours and then hourly after that. Normal coagulation is a stable clot and that indicates that there is no envenomation and we need to do a whole blood clotting test every 30 minutes to one hour for further monitoring. A semisolid clot indicates the wrong technique or contaminated test tube. This requires repeat testing. Completely uncoagulable liquid blood indicates systemic envenomation and requires immediate ASV,” he explains.

Dr Paul says that the anti-snake venom is the cornerstone for treatment in India. “The ASV which is produced in both liquid and lyophilised form is effective against the four major types of snake bites. The major differences are the storage and shelf life. Liquid ASV requires a reliable cold chain and has a two-year shelf life. Lyophilised ASV, in powder form, has a five-year shelf life and requires only to be kept cool. The administration of antivenom should be carried out only on confirmation of envenomation. It is also pointed out that only unbound, free-flowing venom in the bloodstream or tissue fluid can be neutralised by it. It carries the risk of anaphylactic reaction and doctors should be prepared to handle such reactions,” he says.

Why do snakes enter houses?

Gowri Shankar, a wildlife biologist, and founder director of Kalinga Centre for Rainforest Ecology (KCRE), Agumbe, Karnataka, says that snakes enter houses only for three reasons – food, shelter and passage. “Snakes eat frogs and rats. Snakes get attracted by rats in the houses if there are any. They come for shelter when we provide them with cooler and darker places to settle. If the house is in the middle of a resting and feeding ground, the house then becomes a passage,” explains Shankar, who has been working on the conservation of king cobras in the Western Ghats.

Shankar also agrees that the one sure cure for venomous snake bites is the antivenom serum. “If you can’t identify the snake, then treat it as a venomous snake. Do not attempt to catch or kill it as there are chances of getting bitten in the process,” he says.

How to avoid snake bites

Dos and don’ts when a snake is found

According to Kalinga Care for Rainforest ecology: