Home
Articles
Water can be a friend or a foe
5

Water can be a friend or a foe

Drowning is a major public health problem. If adequate precautions are not taken, it can happen even among swimmers 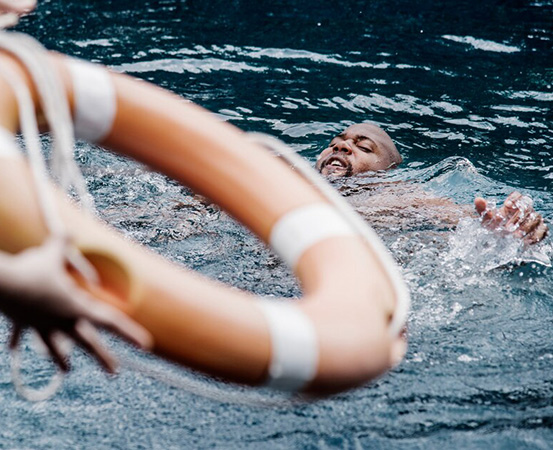 Relaxing at the edge of a waterbody is thrilling but can also turn fatal with a mere fall in the absence of a timely emergency response.

“Drowning episodes are not necessarily seen only among non-swimmers; even swimmers drown when they do not use the proper swimming techniques in the pool or during high tides at ocean, and end up gulping water while swimming,” says Dr Aslesha Vijaay Sheth, consultant & clinical lead, department of emergency medicine, Kauvery Hospital, Chennai. She says the first thing to do is to recognise if someone is drowning and provide help.

Drowning is the process of experiencing respiratory impairment from immersion in liquid.

Dr Nalini Bala Pandey, obstetrician and emergency medicine consultant, Lok Nayak Hospital, Delhi, says the outcomes are classified as death, morbidity and no morbidity. She says one can fall into syncope or fainting. “Synocpe can be a result of certain stressful triggers which lead to sudden drop in blood pressure and heart rate or it can result from cardiac dysrhythmias (irregular heartbeat) on sudden contact with water that is at least five degrees Celsius lower than body temperature. The risk is proportional to the difference between body temperature and water temperature,” says Dr Pandey.

Drowning is the third leading cause of unintentional injury death, accounting for seven per cent of all injury-related deaths. Global estimates put the number of annual deaths from drowning at 2,36,000, making it a major public health problem as per the World Health Organization.

“Unlike movies where drowning scenes are shown with the person screaming for help, in reality drowning people die silently,” says Olympian swimmer Hakimuddin Habibulla, managing director of Myrtha Pools India Pvt Ltd, Bengaluru. “When people are in panic, they cannot scream, and they tend to use the wind or sound passage to breathe. It is also a false assumption that people do not drown in shallow water. We see many drowning cases in shallow water where they would have fallen unconscious or jumped and hit their head before losing consciousness and drowning. Hence people need to be alert near waterbodies to identify if someone is drowning and call for help or try to help the person without endangering oneself,” he says.

Talking about a recent case, Dr Sheth says, “A teenage boy who had gone to a beach in Chennai along with his friends for boating fell off the boat due to high tides. The boy didn’t know swimming and was helped by his other friends who saved him and gave him first aid. He experienced partial drowning and breathlessness when he was rushed to our hospital. His oxygen levels were quite low, and we knew he had gulped a lot of water which had entered his lungs. The boy was treated with oxygen, nebulization, IV steroids and antibiotics. Within two days, he recovered and was discharged from the hospital,” she says.

Habibulla says when children are taught swimming, they are often not taught about water safety and how to rescue someone from drowning. “You must know how to keep yourself safe before rescuing another person from drowning. Basic water safety and rescuing techniques are not taught at the time of learning swimming. Due to lack of awareness, the people who attempt to rescue another person end up drowning since in panic the [latter] tends to pull down [those helping them] along with them, leading to multiple drowning deaths,” he says.

Drownings are not restricted to sea, beaches, and wells.

“Drownings can occur in domestic settings such as swimming pools, hot tubs, bathtubs, large buckets and rainwater tanks, and in all forms of natural bodies of water,” says Dr Pandey.

Significant drowning injuries lead to pulmonary injury and hypoxia (short supply of oxygen to brain) compared to the amount of water aspirated (fluid collection in lungs) and the duration of submersion in water, says Dr Pandey. She says the aspiration of 1ml/kg to 3 ml/kg of either fresh water or saltwater can lead to various complications. It can:

How to save a drowning person?

Dr Pandey says there is no need to clear the airway of aspirated water as only a limited amount of water would have been aspirated by a majority of drowning persons which is rapidly absorbed into the central circulation, so it does not act as an obstruction to the trachea (U-shaped tube that connects the voice box to the lungs). “In some cases, drowning persons do not aspirate water as they develop laryngospasm (breath holding),” she says. “Any attempts to remove water from the breathing passages by any means other than suction (abdominal thrusts) are unnecessary and potentially dangerous. Routine abdominal thrusts for downing persons are also not recommended. Two rescue breaths need to be given right after the person is removed from the water if they are unresponsive by opening their airway.”

She says if the person starts to vomit while performing chest compressions, the rescuer needs to turn the person’s body to the side and remove the vomitus using finger or suction.

Dr Sheth says some people experience partial drowning where they are able to speak but find it difficult to breathe. “In such patients, reassure them, make them sit comfortably with their backs upright and heads facing forward,” she says. “Ask them to take deep breaths and if you find them having a wheeze or any other symptoms, rush them to the hospital immediately to treat with IV medications and nebulisers if needed, since drowning can cause some significant amount of aspiration.”