Home
Articles
Why does a fever follow a jab?
0

Fever is a common side effect of vaccinations: it shows the child’s immune system is responding to the vaccine. But its absence does not imply the vaccine is ineffective 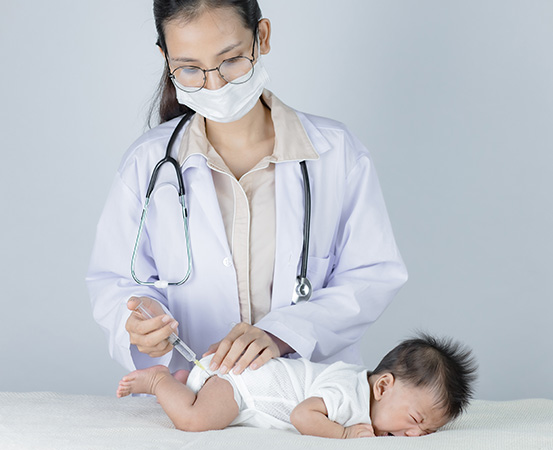 One of the first parenting hurdles is managing a newborn after a dose of vaccination. While some parents are prepared, some feel anxious when the baby gets a fever and has crying spells after the jab.

Experts say fevers are a common side effect of vaccination; it shows that the immune system is responding to the vaccine with a mild increase in body temperature.

How to deal with jaundice in newborns

Diaper rashes and how to treat them

How good are massages for babies

Ponnu Alpho Joseph, a mother and fashion designer from Bengaluru recalls how she prepared herself to deal with it. Joseph delivered her daughter in 2021. She recalls that the doctors had clearly explained to her what to expect after vaccination and she was prepared for the same.

“The doctors had given her the BCG vaccination at the time of birth; she had a mild fever and constant crying spells,” she says. Bacille Calmette-Guerin or BCG is a vaccine given to prevent tuberculosis (TB).

Fever or no fever, vaccination is effective

As Dr Sunil Puraswani, consultant paediatrician and neonatologist, Motherhood Hospitals, Indore says that it is natural for children to develop a fever after a vaccine shot. He says that contrary to the assumption that fevers are associated with illnesses, they are nothing but the body’s immune response to a disease.

Joseph still remembers when her daughter got the DPT (diphtheria, pertussis, tetanus) vaccine when she was six weeks. “I was scared, and I knew my daughter was in pain as she would constantly cry. I had to stay up all night to give her oral paracetamol drops at regular intervals for the fever to reduce,” she says.

Being aware of a child’s vaccination calendar is a must, say doctors.

Do you know your child’s vaccine schedule? – Happiest Health

“Fever is developed to fight the dead disease-causing catalysts like a virus or bacteria. Once the antibodies are made, the body remembers the germ and in case exposure to the same happens in the future, the body’s immune system destroys it before you get sick,” says Dr Puraswani. Antibodies are the protective proteins made by the immune system to fight against foreign substances in the body.

Vaccination imitates natural infections without making the recipient ill, says Dr Kiran. “In some children, the immune response causes symptoms such as a mild fever (< 38C), but not everyone who reacts to a vaccine gets a fever. The absence of fever, however, does not imply that the vaccine is ineffective,” he says.

How high do fevers get?

Joseph recalls that she was worried to see her daughter in pain and with a fever of over 99 degrees Fahrenheit for two days. “Any new mother would get scared by seeing the discomfort and the running fever. But it is important to understand that these vaccines are necessary for them, and these side effects wear off after a day or two,” says Joseph.

Fevers after a vaccine usually occur within 48 hours, says Dr Puraswani. “Fevers caused due to a vaccine do not usually cross 102 °F. They can be accompanied by other symptoms such as body pain, chills and fatigue. An anti-fever medicine is not recommended if the fever is below 99 °F,” he says.

When to consult a doctor?

According to Dr Kiran, a doctor’s consultation is needed in cases when the fever is higher than 38 degrees Celsius (100.4 °F), lasts longer than 48 hours, the child is irritable, lethargic or has other symptoms such as a runny nose or a headache.

Dr Puraswani says until a child is approximately ten years, vaccines would be a regular part of his or her life. “These vaccine shots would be accompanied by certain side effects which could include fever and a little bit of fatigue. These side effects should subside within a couple of days without any medical intervention. However, if the fever is very high and is accompanied by other symptoms such as extreme drowsiness, nausea and unbearable body ache, it is advisable to consult your child’s paediatrician immediately,” he says.

Which vaccines cause side effects?

The majority of vaccinations cause some pain and redness at the injection site, says Dr Kiran. “Other vaccines, such as measles, mumps and rubella (MMR), can cause a fever, runny nose and body rash seven to ten days after vaccination. Skin rash and pustules can occur after a few days of varicella vaccination. Similarly, the DPT and meningococcal vaccines can cause irritability in children,” he says.

Not every vaccine causes a fever, or at least they do not cause a fever in everyone’s body, says Dr Puraswani. Citing an example, he says, “The covid-19 vaccine caused fever in a lot of people. Others faced side effects without getting a fever. So, it depends on the person. DPT vaccine jabs usually cause a fever. However, the fever should subside in a day or two.”

What are painless vaccinations?

Dr Puraswani says that painless vaccinations contain fewer antigens when compared to the whole cellular material of a virus or bacteria. “The more painful variants of such vaccines usually contain the complete cellular material of antigens. Painless vaccines are mostly used in children and babies. Administration of both these kinds of vaccines can cause pain during the process, however, the painless variants are more likely to produce less painful side effects post-immunisation,” he explains.

The DPT vaccine is typically administered at six, ten, 14 weeks and 18 months, says Dr Kiran. “It is administered as part of a combination vaccine (mixture of two or more vaccines given in one shot). A painless variation of the DPT is known as DaPT (diphtheria, acellular pertussis and tetanus). The DaPT vaccine, in addition to being painless, is just as effective as the traditional painful DPT vaccine,” he says.

Vaccination imitates natural infections without making the recipient ill. In certain cases, the immune response causes symptoms such as a mild fever. Fevers caused due to a vaccine do not typically cross 102 °F. They can be accompanied by other symptoms such as body pain, chills and fatigue.