Since children affected by measles missed their routine vaccination, an extra dose of the vaccine is a must in outbreak areas 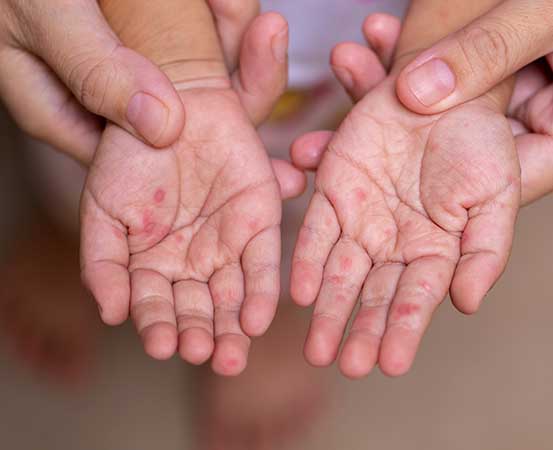 The recent outbreak of measles among children in six Indian states has raised concerns. Disruptions in routine paediatric immunisation programme during the pandemic is said to be the major contributing factor behind the outbreak. Not limiting to India, highly contagious measles outbreak has been reported in Ohio, USA, and in certain provinces of South Africa such as Northwest, Mpumalanga, Limpopo and Gauteng.

Affected children are those who missed their routine measles vaccination, says Dr Nitin Shah, section head, paediatrics, P.D. Hinduja hospital, Mumbai, and taskforce member for measles outbreak and elimination in Maharashtra. He adds, educated parents have got their children jabbed, whereas the children affected by measles largely belong to families from under privileged section who migrated during the pandemic along with unvaccinated and malnourished children from slums. “Not a single case in Mumbai is from a high-rise building. All cases are from slum areas,” said Dr Shah.

READ MORE
Chickenpox: managing the symptoms
Elephantiasis: A burden at every step?
Pink eye? Blame infections (or other people)
Maggot infestation: when worms invade the body

Signs and symptoms of measles

“The rashes start to spread from behind the ear and gradually go down to the shoulder, chest and leg and fades in the same way,” says Dr Shah. An infected child must be taken to the doctor and should be further isolated during treatment to avoid the spread. There will not be any symptom during the incubation period (0-14 days). A measles affected child becomes infective four days prior to and after the onset of rashes.

Diagnosis and management of measles

Dr Shah says that all doctors must notify cases of fever accompanied by a rash. If more than five cases are reported in a primary health centre/health post area, further investigation is done with reverse transcription polymerase chain reaction (RTPCR) and antibody tests. “If two out of five cases turn out to be positive for measles, then that health post is considered to be having a measles outbreak. In Mumbai, an outbreak has been reported in 78 health posts. In seven out of the 78 affected health posts, more than 10% of affected kids are aged below nine months,” said Dr Shah.

Maharashtra has started inoculation against measles by immunising the children (below five years) who missed their first or second dose of vaccination, irrespective of an outbreak in that area.

Dr Subhash Salunke (former director of state health services, Maharashtra), who is currently heading the task force to tackle the outbreak in Maharashtra, says that Coronavirus disease (COVID) played a very significant role in diverting the energy and resources from routine immunisation programmes in the last couple of years.

According to Dr Shah, 25 million children are born in India every year, which corresponds to five lakh children being born every week. “In 2020, lock down, migration and other such disruptions resulted in nearly two crore children not being vaccinated. Vaccination against COVID became the priority and all the healthcare and field workers focused on COVID vaccination, as a result of which routine immunisation suffered,” said Dr Shah, former president of Indian Academy of Pediatrics. Measles vaccination is covered under measles and rubella (MR) vaccine in government vaccination schedule and under measles, mumps and rubella (MMR) vaccine in private vaccination schedule. The first dose is given at the ninth month and the second at the sixteenth month.

Dr Salunke also blames vaccine reluctance and lack of awareness. “There are certain pockets in metro [cities] like Mumbai where the migrant population lives. Getting vaccinated is discouraged in such areas, especially in certain communities,” he said.

The need for an extra dose in outbreak areas

“As an outbreak response immunisation (ORI) in affected areas, one dose of measles vaccine is to be given to every child as an extra dose between the age group of nine months to five years. That is irrespective of their past vaccination status. These kids will also receive their age-appropriate measles vaccine if it is pending,” said Dr Shah.

Zero dose of measles vaccine is a must in outbreak areas. In areas where measles cases are more than 10% (in children below nine months), children between the age group of six to nine months will also be given a dose, which is known as the zero dose. “They will continue to receive their age-appropriate MR vaccination as they grow. There must be a gap of 28 days between the two doses,” said Dr Shah. There is no upper age limit for taking measles vaccination, the doctor added.