Beware of these liver health complications 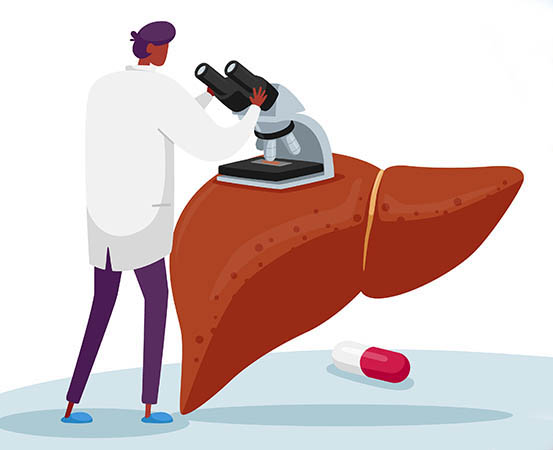 The liver is not only one of the largest organs and glands in the human body, but is also directly involved in multiple processes including metabolism, toxin filtration and hormonal secretion. However, it often comes under threat from viral infection, inflammation and unhealthy lifestyle. Some of the major liver complications are:

Hepatitis A is an acute liver inflammation caused by the hepatitis A virus. It is usually contracted through contaminated food or water and through direct contact with an infected individual. Dr Thiagarajan Srinivasan, senior consultant & director, Institute of Liver Diseases, Transplant & HPB Surgery, MGM Healthcare, Chennai, explains that “Hepat” means liver and “itis” means inflammation. It is often reported from across the world, especially in regions with poor sanitation and hygiene. Dr Srinivasan points out that there is a vaccine for treating hepatitis A.

This variant of hepatitis has an incubation period ranging from 14 to 28 days and can infect both adults and children. The recovery is often slow and treatment mainly involves nutritious food and health management. Hospitalisation could be avoided unless the affected person shows symptoms of acute liver failure. The common symptoms of hepatitis A include diarrhea, fever, jaundice, vomiting and appetite loss.

Hepatitis B is a form of liver infection which could lead to liver cirrhosis and cancer. It is caused by hepatitis Virus B and is transmitted through body fluids (mainly through blood, saliva and seminal fluids), infected needles and unprotected sex. It could also be passed on from mother to child. The incubation period of this virus could range from one to three months. The condition doesn’t have any symptoms initially but could progress with symptoms of jaundice, nausea, vomiting and diarrhea. It is easily preventable with a three-dose vaccine course which is usually completed within six months of the first dose.

The hepatitis C virus triggers a chronic or acute case of liver inflammation classified as hepatitis C. It could be transmitted through blood transfusion, infected syringe, unprotected sexual intercourse, etc. However, it cannot be transmitted to children from infected mothers through breast milk. The symptoms are similar to the previous hepatitis variants. According to the World Health Organisation (WHO), the immune system of some newly infected people can tackle the infection. However, if the condition becomes chronic, then expert medical care is necessary to avoid liver failure. As of now, there is no effective vaccine for hepatitis C.

Hepatitis D infection does not occur in isolation and is often seen in people already diagnosed with hepatitis B. The virus variant responsible for hepatitis D cannot replicate on its own unless coupled with the hepatitis B variant. Dr Rajesh Upadhyay, senior director, gastroenterology, Max Super Speciality Hospital, New Delhi, says that an individual could be infected with both these variants at the same time. However, he admits that it is not very common.

This variant of hepatitis has a lot in common with hepatitis A and both of them are the most common forms of hepatitis infection on a global scale. The hepatitis E virus is mainly water borne. The symptoms include fever, jaundice, abdominal pain, rash, malaise, etc. It is considered to be a self-resolving condition that can be cured in about two months once the virus is excreted out of the body. However, hepatitis E can also rarely lead to fulminant hepatitis, a version of acute liver failure which could be fatal.

Dr Upadhyay points out that as the name suggests, NAFLD is not linked to alcohol consumption but has got more to do with fat deposition on the liver (mainly from excess consumption of refined carbohydrates and processed foods). A sedentary lifestyle is also a major reason for this condition. Dr Shivaram H V, head of Surgery & allied Specialties and program director of Bariatric & metabolic surgery, Aster CMI Hospital, Bengaluru, says that there are four grades of fatty liver disease. It starts with nominal deposition of fat on the liver and could progress to end-stage cirrhosis. NAFLD leads to non-alcoholic steatohepatitis (NASH), a severe inflammation that could lead to cirrhosis and liver failure. Steatohepatitis is also a precursor for insulin resistance and type 2 diabetes. People diagnosed with type 2 diabetes are at higher risk of developing NAFLD.

Jaundice could be a good indicator of liver malfunction. It is essentially caused by excess bilirubin in our blood. The liver is responsible for replenishing red blood cells and removing excess bilirubin through stool. Jaundice is mainly caused if the liver is damaged and is unable to filter out bilirubin from the system. The main symptoms of jaundice include yellowness of eyes, skin and urine. Dr Upadhyay says that jaundice is not a disease of the liver on its own but is a symptom of other liver complications. It could even lead to liver cancer without proper medication.

This is also known as end-stage liver disease. It affects the regenerative capacity of liver tissues. The liver becomes unable to replace its scarred tissues with new ones, eventually leading to liver failure. Cirrhosis is common to all major forms of liver infections and diseases including hepatitis and fatty liver. Cirrhosis means scarring of liver and is triggered by inflammation (like hepatitis) that damages healthy liver tissue. Dr Upadhyay explains that as inflammation sets in, the damaged area within the liver (due to consistent inflammation) is replaced by hard tissue called fibrous or scarred tissue.

Once Cirrhosis sets in, the liver is called cirrhotic liver and starts to shrink in size. The main symptoms include jaundice, abdominal fluid accumulation, vomiting and blood in stool.