In most cases, the treatment for alcoholic hepatitis or any alcohol-induced liver condition is to first eliminate the offending agent 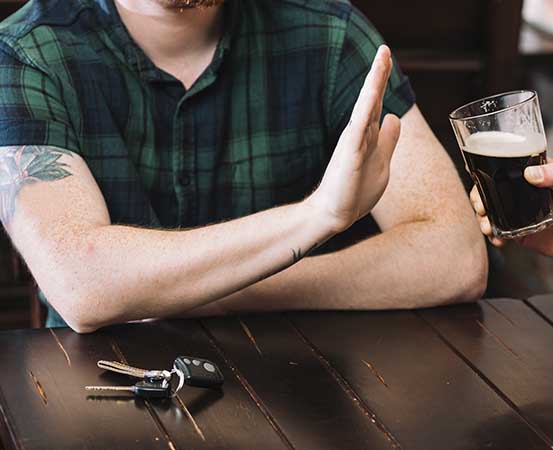 On the morning of 4 July 2020, Justin L, a native of Wyoming, USA, woke up feeling sick. While he initially thought he was down with Covid, in a few days the shudders and excessive sweating progressed to excruciating pain in the stomach and the inability to walk.

The next week, Justin had debilitating nausea and dehydration. The week after that, life was starting to look blurry to him. On October 5, he was officially diagnosed with alcoholic hepatitis.

“The doctor laid out my diagnosis: alcoholic hepatitis. With a dash of cirrhosis,” Justin tells Happiest Health. “We were talking possible liver transplant. The doctor said I’d have to be sober at least two years to even be considered. That left me wide-eyed. I was wishing I had more years as he was talking about liver transplants.”

Today, Justin is over two years sober, runs three miles daily and thinks he “might be in the best shape of my life”.

“In this case: alcohol,” he says. “The person is asked to immediately stop drinking alcohol and eliminate it completely from their lives.”

What is alcoholic hepatitis?

Dr Pankaj Puri, director of gastroenterology and hepatobiliary sciences, Fortis Escorts, Okhla, New Delhi, says that most people who drink alcohol will have fat in the liver.

“However, in some of these people, a derangement of liver function occurs, leading to an abnormal liver function test,” he says. “Liver function tests are blood tests capable of detecting the degree of damage or inflammation in the liver by checking the levels of chemicals (enzymes), proteins and other substances in the liver. There is increasing scarring and stiffness in the liver in the presence of background fats. This is what is defined as alcoholic hepatitis.”

Dr Puri says that there are chances of alcohol-related liver damage progressing to liver cirrhosis and failure, liver cancer and death.

Dr Puri says that if detected early, it is possible to reverse alcoholic hepatitis. He adds that the need is to catch the condition before it leads to significant scarring and fibrosis. Fibrosis is an accumulation of scarred liver tissues resulting in reduced blood flow in the liver. Dr Puri says that it can also lead to the development of cirrhosis, where the scarred liver undergoes permanent damage.

“For people among whom the disease is severe and already at an advanced stage, the mortality rate is at around 50 per cent,” he says.

Dr Asthana, while agreeing that it is possible for people to fully recover from alcoholic hepatitis if the condition is identified and treated on time, says that it would depend on the degree of damage the liver has previously suffered.

“Alcohol can damage the liver in multiple facets,” he says. “One of the most common forms of alcohol-induced liver damage is when people drink steady amounts of alcohol for long periods of time, which can cause ongoing damage and fibrosis (scarring) of the liver. Some of these people may not show any symptoms of liver disease until it reaches a late stage of liver damage.”

The second type of commonly seen case, especially among young adults, says Dr Asthana, is binge drinking, marked by the consumption of a large amount of alcohol in a short period of time — a weekend, for instance. “Binge drinking can also cause significant damage to the liver and cause inflammation,” he says.

Dr Puri says that people who engage in regular alcohol intake over a long period of time may exhibit some markers of alcoholism such as:

“People who binge-drink, meanwhile, may present with deep jaundice, swelling in the feet and the abdomen,” he says. “The ultrasound is going to show fluid and fat in the liver.”

Severe alcoholic hepatitis is defined by a combination of tests through which people can be scored. “One of the common ways to score is the Maddrey score,” says Dr Puri. “There is also the Glasgow score, the model for end-stage liver disease (MELD) score. We can look at these scores to understand how severe the disease is. People with severe disease have a high mortality rate and would require more extensive therapy.”

According to Dr Puri, those who have comorbidities, are obese and have underlying fatty liver disease, with associated hepatitis B and C, are more prone to developing alcohol-related liver damage.

Justin says a sober friend supported him through the process of recovery.

“She really listened,” he says. “She really understood and steered me into more Alcoholics Anonymous (AA) rooms.” AA is a fellowship of men and women who help each other with their common problem with alcoholism.

Justin began attending AA meetings a few times a week. He also adopted a fitness routine to keep himself busy on the days he wasn’t attending the meetings. “Things started to change without me realising it,” he says.

About his life today, Justin says, “I keep a very balanced diet. I try to meditate daily. I attend AA meetings almost every day. I am working in the field I love and went to university for the same. I am financially stable. I often travel. I see friends weekly, if not daily. I show up for my family. I answer phone calls and texts. And I listen.”

Justin says AA helped him realise he doesn’t have to be alone in addiction. “You don’t have to carry yourself like a monster,” he says. “It’s a victory, not a blemish.”