Home
Articles
What to do when a child has head lice?
102

What to do when a child has head lice? 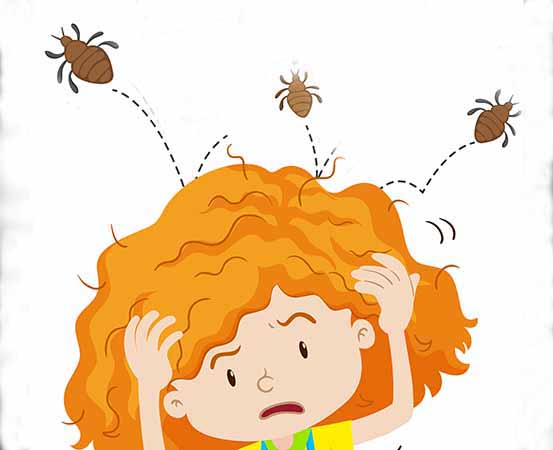 In December 2021 Madhurima Dutta, a homemaker from Kolkata, had reason to look particularly carefully at her eight-year-old daughter’s head. “I made her sit on my lap and checked her head,” she says. “I noticed numerous head lice and lice eggs attached to my daughter’s hair.”

The girl used to constantly complain about irritation and itchiness on the scalp, but Dutta had spotted lice on her sweater only moments earlier.

She gave her daughter a head bath and followed it with wet combing. But since that did not get rid of the lice, Dutta had to then consult a doctor.

Lice are tiny bugs that attach to the hair and feed on a small amount of blood from the scalp. Their bites and movement create itchiness on the scalp. Though common among all children, lice invasion is reported more often among girls because they usually keep long hair.

The condition of head lice infestation is known as pediculosis, says Dr Asmita Mahajan, consultant neonatologist and pediatrician, SL Raheja Hospital-Fortis, Mumbai. “Generally, lice can live up to one month in a host body. Lice can be transmitted from one person to another. The transmission is very easy in crowded places like schools or day-care centres. This could be a reason for frequent head lice among children, depending on their hygiene habits.”

Rigorous scratching of the head is the most common symptom of head lice.

“Mothers can check the hairlines or any boils on the scalp of the head,” says Dr Mahajan. “Checking can also be done by combing the child’s hair. The wet-hair combing technique can be useful. White nits also can be checked.”

According to Dr Kuna Ramadas, professor, department of dermatology, venerology and leprosy, Kamineni Academy of Medical Sciences and Research Centre, Hyderabad, “Pediculosis causes itchiness (red bumps on the scalp), which in turn causes secondary bacterial infection. The treatment will be different if the head scalp contains dandruff.”

Usually, it takes one week to wash off the head lice. Dutta, the homemaker from Kolkata, says that using a medicated shampoo and regular wet combing helped bring her daughter’s lice problem under control.

How to reduce frequency of head lice infestation

A key measure is to maintain hygiene and stay far from the person who has pediculosis, says Dr Ramadas. “Having separate combs for persons with pediculosis can control the spread to others,” he says. “Otherwise, the lice can spread among the whole family.”

It is also a good idea to ensure the separate washing of the clothes, bedsheets and bedcovers used by an affected person. “Soaking in hot water before washing helps,” Dr Ramdas says.

Dr Ramdas and Dr Mahajan both suggest that if a child is affected by lice invasion, then the family members also should check their hair to avoid the recurrence of infection.

If a child loses hair in the lice infestation area, some doctors recommend vitamin syrups as a supplement.

Some children with lice feel embarrassed and hence become vulnerable to being bullied by their peers. Dr Mahajan says parents can help in such cases by being empathetic. Instead of telling their ward to just tolerate the bullies and be friendly, parents must support the child rather than let them feel ashamed, she says.

“In case of bullying, the parents must report the same to the school authorities and [also] speak with other parents if their children’s behaviour is objectionable,” says Dr Mahajan.

She says parents must understand that head lice are not their child’s fault, but a common childhood problem.