Home
Articles
What happens when a child ingests a tiny object?
0

What happens when a child ingests a tiny object?

A child ingesting a tiny foreign body is a common pediatric emergency. Doctors say parents and caretakers need to take adequate precautions and keep an eye on children’s activities

Children often tend to swallow a small object and end up in paediatric emergency wards. Two years ago, a five-month-old baby was brought to the emergency section of a private hospital in Bengaluru after she turned blue and had breathing difficulty.

While the baby’s condition was worsening, the doctors had no clue about the cause. Only after repeated questions was it found out that the grandmother had given portions of an orange to the baby – and a seed got stuck in her trachea or the windpipe.

“As the family mentioned that the baby had had cold two to three days earlier, we first thought it could be pneumonia,” says Dr Supraja Chandrasekar, paediatric intensivist, Manipal Hospitals, Yeshwantpur, Bengaluru. “But the baby showed no response to the treatment. Only after repeated questions did the grandmother reveal that the baby was fed with oranges. When we checked we found that one seed had stuck in her trachea. We did an endoscopy [six hours after the admission], and she survived.

Do you know your child’s vaccine schedule?

A sore throat could be why your child is refusing food

That’s the youngest baby with foreign-body ingestion that Dr Supraja has seen.

Foreign-body ingestion among kids is one of the most common but major paediatric emergencies. Doctors say such emergencies are preventable but only if parents and caretakers take enough precautions and keep an eye on children’s activities.

Most common foreign bodies that lead to choking on ingestion include:

Know when children swallow an object

Irrespective of the nature of the foreign body, any object entering the lungs or windpipe is an emergency, says Dr Nagar. That’s unlike the foreign bodies entering the stomach that may or may not cause an emergency depending on the article ingested. The doctor says he has seen instances of aspiration (accidental breathing in of food or liquid into the lungs) in kids due to seeds, peanuts and even vegetable pieces getting stuck in the windpipe leading to emergencies.

Dr Nagar tells Happiest Health about a case of a two-year-old boy who had aspirated a sugar-cane piece which was stuck in his windpipe. The boy was brought to his hospital with a history of cough and cold. “On examination with the stethoscope, it was learnt that one half of the lung was fine and something was wrong in the other half,” says Dr Nagar. “That always raises doubt of a foreign body. When asked, the parents said that it all started with the boy chewing sugar-cane pieces three days ago.”

Unless the foreign body is stuck in the windpipe, a child may not have cough or choking. And it’s in such cases that the foreign body may have entered lungs and the medical team has to probe further.

Left untreated, a foreign particle stuck in the lungs leads to repeated infections and pneumonia. If it gets ignored for a long time, it can further damage the lungs, says Dr Nagar. “There have been situations wherein we have seen children suffering from pneumonia for two to three years and then on investigation a foreign body was found in the lungs,” he says. “Ingestion of coins, batteries and magnets are the ones which are commonly seen in pediatric emergency units and they must be removed as early as possible. Smaller button batteries are the most dangerous ones.”

Dr Nagar says that foreign-body substances such as coins and batteries are radio opaque (opaque to any form of radiation) and are hence easily visible on X-ray. If there is any organic matter which is non-radio opaque and is stuck in the lungs, that will not be visualized in any imaging. In such cases the doctors have to go by the history and do endoscopy.

Dr Supraja says there were cases wherein children with a history of foreign-body ingestion have been wheeled in from the emergency section directly to the operation theatre for endoscopy to prevent a life-threatening condition. Through endoscopy, a foreign body stuck in the digestive tract can be removed.

Sometimes, depending on the nature of the foreign body swallowed, there is chance that it will get expelled via stools. A one-year-old baby expelled the rubber cap of an earphone that he had swallowed in stools three days later, Dr Nagar says. However, in all such cases medical attention is a must.

There have also been cases of kids suffering aspiration due to seeds. Another common foreign-body ingestion cases brought to emergencies are of small plastic parts of whistles. “Any whistle will have small plastic particles inside it,” says Dr Nagar. “When you blow a whistle, if the part inside is detached or broken, there are chances of the particle being sucked up to the lungs.”

In such cases, upon noticing a child choking due to foreign-body ingestion, one must immediately take the child to the emergency section of a hospital. Once there, the medical team will clear the airway — starting from the nose to the windpipe to the lungs — to allow the child to breathe. 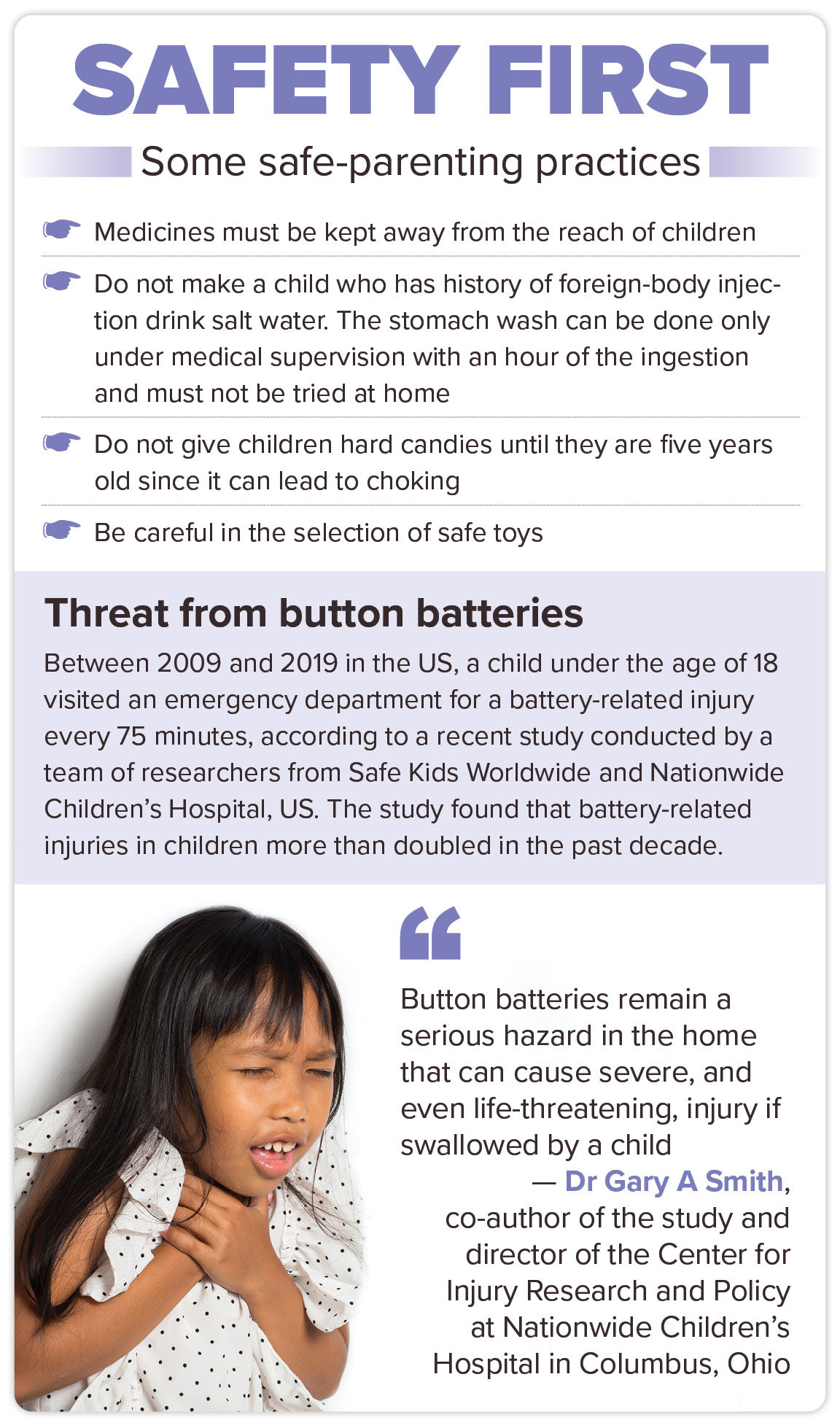 How to help children who swallow a tiny object

Choking occurs when a foreign body completely blocks the airways. In such cases no air can enter the lungs and the child can’t talk. Dr Supraja says this can happen anywhere and not necessarily at home or in schools or in public places like restaurants. “If a big chicken piece or a food block gets stuck in their windpipe by mistake, kids can’t talk,” she says. “There is something called universal choking sign, where the affected person will hold their neck with both hands, look extremely anxious and turn blue.”

In such cases, a person sitting next or near the affected one can start immediate first aid, she says. “The first aid is to dislodge the foreign body so that some air can go in,” says Dr Supraja. “[One] manoeuvre is called Heimlich manoeuvre or giving abdominal thrusts.”

The technique followed for the manoeuvre differs depending on the age and size of a person.

But in situations where performing the Heimlich manoeuvre is not possible or immediate medical help is not available, the affected child or person could choke, have their oxygen level drop and ultimately collapse and have a cardiac arrest. In such cases, cardiopulmonary resuscitation needs to be done till the time the ambulance arrives, says Dr Supraja.

Keep a watch on toddlers

“When at play, kids do not realise that they have something in their mouth,” says Dr Supraja. “Keeping a coin, eraser, sharpener or any food particle [in the mouth] when they talk, jump and run around, there are chances that they suddenly aspirate where the food — instead of going to the food pipe — enters the trachea. Rigorous action may dislodge it into bronchi and ultimately it reaches the lungs,” says Dr Supraja. So, it can be stuck anywhere from the windpipe to as deep as the lung tissue itself, she says.

Dr Nagar recalls the case of a five-year-old boy who had consumed a bunch of iron tablets. The parents took the boy to the doctor one day later. “The boy had suffered from an iron overdose and he had significant liver damage, but recovered,” he says. “There was blood in the vomit. Iron overdose is dangerous, and it causes liver damage.” Accidental ingestion of drugs can cause complications, depending on what the drug is and its side effects.

The doctors also caution against the accidental swallowing of mothballs, naphthalene and camphor, which can potentially lead to seizures and cause neurological complications.