A 60-year-old Bangalore resident with diabetes and a history of cardiac issues checked into a private hospital recently with a fever and difficulty in breathing.

While his Covid test was negative, the test for influenza H1N1 returned a positive result.

“Within two days of getting admitted at the hospital, the person developed severe lung damage,” says Dr Sachin Kumar, senior consultant, pulmonology and critical care medicine, Sakra World Hospital, Bengaluru. “His condition was so severe that despite 100 per cent oxygenation and putting him on a ventilator, his health was not improving. This is a case of H1N1 acute respiratory distress syndrome (ARDS).”

Pneumothorax: Air in the chest but not in the lungs
When air sacs in lungs turn into tiny balloons of water
Asthma: don’t mistake it for a common cold

The doctors then decided to conduct face-down oxygenation, also called prone ventilation (sleeping on the belly), to improve the oxygen flow. After spending close to two weeks under critical care at the hospital, the person recovered and was discharged.

“ARDS is very common in the critical care setting,” says Dr Kumar, adding that physical manifestations of the condition include fever, followed by cough and breathing difficulty which progresses to a very severe form of breathlessness in a period ranging from a couple of hours to a couple of days. “In most cases, within seven days of the onset of ARDS, the person has full-blown ARDS,” he says.

In ARDS, both the lungs become very stiff, due to which the lung is not able to ventilate, says Dr Ramana Prasad, senior consultant pulmonologist, KIMS Hospitals, Hyderabad. “The person, hence, requires very high doses of oxygen and sometimes the symptoms become very severe. The onset of this condition happens suddenly due to infection in the lungs. The infection could be happening because of bacteria, fungus, tuberculosis or virus. Inflammation can also lead to ARDS. Any inflammatory process — such as hypersensitivity pneumonitis (an immune disorder that causes inflammation in the lungs) or acute interstitial lung disease (a group of diseases that cause scarring in the lungs) and toxic fumes inhalation — can lead to ARDS,” he says.

Dr Prasad says that apart from the respiratory architecture, the main organs that can get affected after the onset of ARDS are the kidneys, the liver, and the brain.

“In all these cases, a lot of damage happens to the respiratory architecture — the alveoli get damaged and filled up with secretions,” he says. “The person affected will hence experience fever and breathing difficulties disproportionately. It may be an acute presentation — meaning, within one or two days of fever or cough, it suddenly progresses into breathing difficulties.”

According to the American Lung Association, the key symptoms of ARDS include:

Diagnosis: Identifying cause of ARDS is key

Doctors say identifying the cause of ARDS is the first step in treating the condition effectively.

“ARDS is like a fever,” Dr Prasad. “There are so many causes behind a fever — it could be because of typhoid, malaria, tuberculosis or dengue. ARDS is simply the common term used for acute presentation of lung pneumonia respiratory distress. The exact cause of ARDS has to be identified first and this underlying cause has to be treated while providing support to the person.”

Dr Prasad says that after a chest X-ray, doing a CT scan is the next step, followed by the ABG (arterial blood gas) analysis to evaluate the intensity of ARDS.

“Since there is a lot of inflammation and infection in the lungs, there is a mismatch of oxygen and carbon dioxide diffusion,” he says. “Proper oxygenation doesn’t occur and at the same time, the carbon dioxide levels will be going up. These can be clearly analysed using an ABG test. To check if an infection or an inflammation is causing the onset of ARDS, we do a sputum analysis. When this analysis also comes back normal, we must further think about other possibilities — of inflammation causing ARDS. If it is related to an infection, we need to identify the organism that is causing it and treat it accordingly.”

Dr Kumar says those at a higher risk for onset of ARDS include people who have diabetes, have a history of kidney and cardiac issues, people with cancer undergoing chemotherapy, very young and very old people, people who have pancreatitis and polytrauma cases (a condition where there are multiple traumatic injuries). 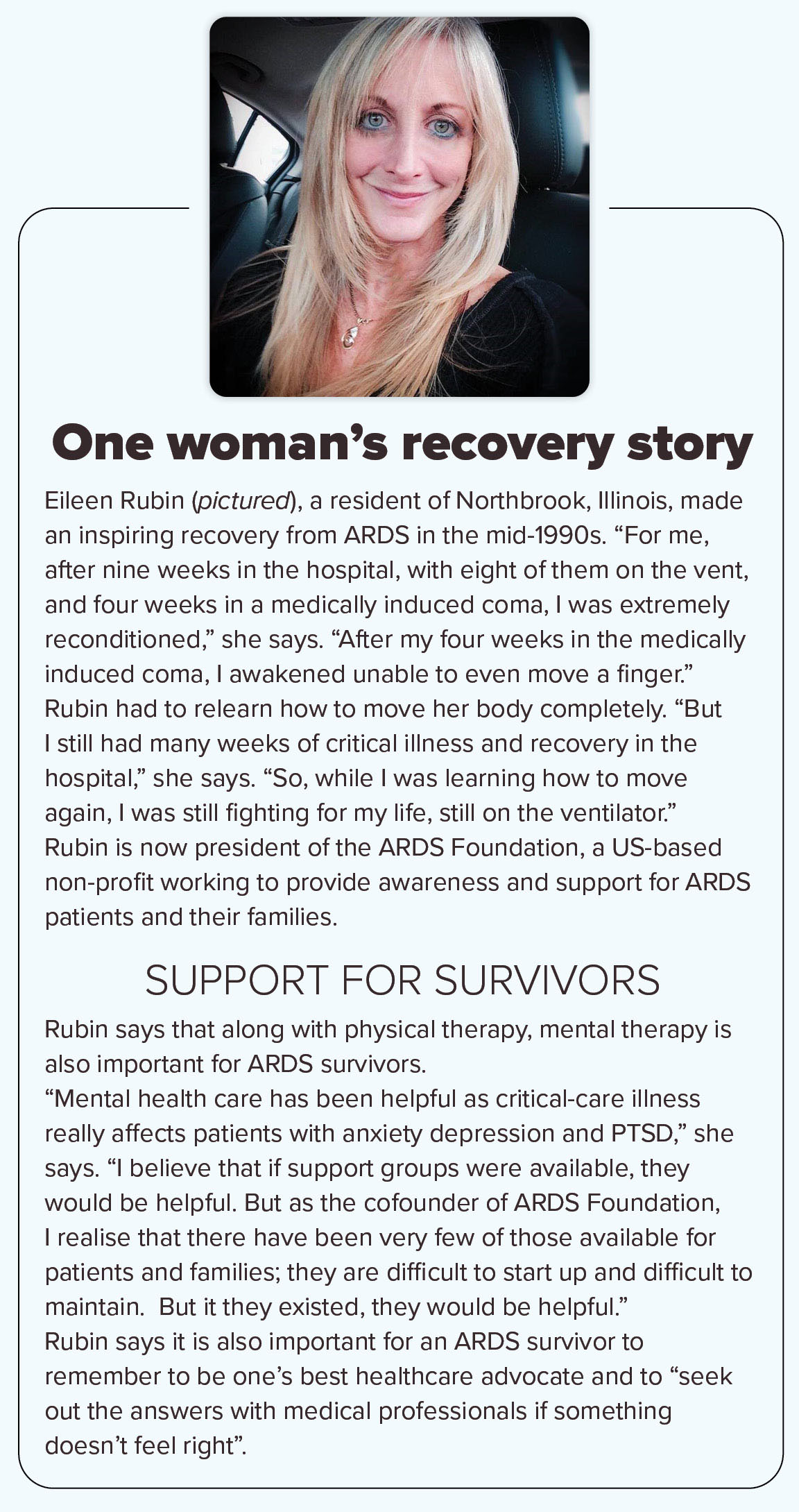 “Mostly, people who suffer from ARDS undergo treatment in ICUs since they have to be monitored for sudden fluctuations in their key parameters,” says Dr Prasad.

While explaining how a typical case of ARDS is treated, Dr Prasad says after diagnosis the first step is providing oxygen support, either through nasal prongs, masks or a high-flow nasal cannula.

“If their heart rate is high and their BP is low, requiring medication, and if the respiratory distress is very high, they may go into respiratory muscle fatigue,” he says. “Further, we need to give them a form of non-invasive ventilation, this could be through a machine called non-invasive ventilator or through BiPap (Bilevel Positive Airway Pressure).

“If the person continues to be breathless, we remove all these things and give oxygen through non-invasive ventilation. Most of the times, once we take care of the underlying cause for ARDS, people respond in some time — it may be three to five days.”

However, he adds, in some cases the deterioration is so fast that it could lead to sepsis (a serious condition where the immune system’s reaction to an infection causes inflammation) and septicaemia (an infection of the bloodstream) also. “In this case, the infection spreads to the blood, causing organ damage,” Dr Prasad says. Due to lung infection, the kidneys and the liver also get affected leading to a possible liver failure and acute kidney injury, necessitating dialysis, he says.

Doctors say there could be a drop in oxygenation despite the person being on non-invasive ventilation support.

“We then switch to invasive ventilation or a mechanical ventilator, in which we need to put a tube into the airways and then pump the oxygen with the required pressure,” says Dr Prasad. “Once we do this and still get an inconclusive diagnosis, we do a procedure called bronchoscopy, where we go into the airways with a tiny camera, see what is happening inside. If there are secretions, we send it for analysis again to reconfirm the cause of onset of ARDS. Depending on the report, we escalate the medication.”

However, if it is a prolonged ventilation, maybe lasting one week, then a tracheostomy will be done, with a hole in the airway or trachea to aid breathing and remove the tube. “Prolonged ventilation because of underlying, persistent infection or inflammation can cause long-term complications — they may become dependent on ventilators or if they come out of it, there are chances of the trachea getting stenosis (where the tracheal airway becomes narrow),” says Dr Prasad.

“Sometimes the vocal cords can also get damaged over a period of time and there can be issues with speaking and talking.”

Dr Kumar says that in cases the affected person’s health does not improve with prone ventilation, the next step is to initiate extracorporeal membrane oxygenation (ECMO), a type of filter that bypasses the lungs till the time the lungs recover. “In ECMO, the blood that comes from the body is purified and then infused,” he says.

Speaking about the period of recovery, Dr Prasad says that it generally takes around five to 14 days for a person who has had onset of ARDS to get over it.

“Most of the time, once the problem has been identified and cured, patients become normal,” he says. “Most of them do extremely well in their day-to-day lives.”