Bronchitis: attack of the allergens

Allergic bronchitis is chronic and may be caused by exposure to allergy triggers such as pollution, dust, chemical fumes or tobacco smoke 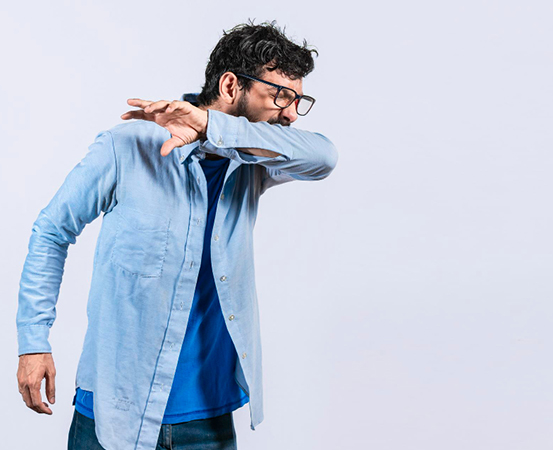 The bronchial tubes in the body carry air into the lungs. The inflammation of these tubes caused by an allergen or by something to which a person is allergic is called allergic bronchitis.

These airways also produce mucus that acts as a natural trap for bacteria, dust and other foreign particles, and prevents them from getting into the lungs. During bronchitis, the airways produce too much mucus, making it hard for a person to breathe.

The most common symptoms and signs of bronchitis are cough with mucous, wheezing, tightness in the chest and fatigue as a result of inflammation in the bronchial tubes.

For diagnosis, doctors look for a cough with mucus and may advise tests like pulmonary function tests, chest X-rays or CT scans.

Environment or genes as triggers?

Dr Mrinal Sircar, director & HOD, pulmonology & critical care, Fortis Hospital, Noida, Uttar Pradesh, says allergic bronchitis is a misnomer and calls it bronchial asthma. He blames allergens like pollen, dust, fungus, insects like mites, and cockroaches for the condition. “It is often genetic, though it can even skip four generations,” says Dr Sircar.

In Samiksha’s case, her occasional smoking was said to be the trigger. “Although I would want to smoke occasionally, I mostly used to accompany my colleagues during their smoke breaks. The doctor suggested that as the cause for my discomfort,” she said.

If allergic bronchitis is not treated properly, it could lead to chronic cough, bronchial asthma and respiratory failure, according to Dr Ashok.

Asthma can become worse with time and less responsive to treatment if not managed in time, warns Dr Sircar.

Dr Yadav says treatment includes short-acting bronchodilators such as those used to help open the airway and provide short-term relief. “Inhaled corticosteroids (hormones to reduce inflammation in the body), long-acting bronchodilators used together with inhaled corticosteroids, leukotriene modifiers (a group of medications that help prevent breathing problems associated with allergies), cromolyn (medicine for asthma or bronchospasm treatment) or theophylline (medicine that opens and relaxes air passages in the lungs) are also used in the treatment,” says Dr Yadav.

Dr Sircar advises primarily inhalers and anti-allergic drugs such as montelukast. He says allergic bronchitis treatment, including inhalers, advised by qualified experts is safe even with long-term usage. Avoiding inhalers as per pulmonologist assessment is positively harmful, Dr Sircar says.

Cinemawala, the homemaker from Ahmedabad, says the doctor started her treatment with an antihistamine shot that provided immediate relief. “I could breathe!” she says. “He also prescribed anti-allergic drugs and asked me to wear a mask the moment I stepped out and initially at home as well.”

Jain, the Bengaluru-based IT professional, says the episodes have lessened in frequency for her now. She says using the inhaler prescribed by the doctor and keeping a humidifier around her when bronchitis occurs ease her breathing.

Dr Ashok urges avoiding triggers and making changes at home to reduce exposure to allergens. She also recommends not smoking or preventing passive smoking around people who are prone to allergic bronchitis. “Keep distance from people who have infections like viral fever, coughing and sneezing,” he says.

Dr Sircar says that breastfeeding of babies can help prevention of allergic bronchitis causes. He also cautions about avoiding musty areas such as walls with seepage since they help in the growth of fungi.

Meanwhile, the road ahead is a little bumpy for Cinemawala. “It gets bothersome to wear a mask every time I step out, and more so when I’m out with my friends,” she says. “My street-food binges have totally stopped.”

Jain misses the gossip during the smoking breaks and struggles to control her cravings for a quick smoke, but the thought of another episode of allergic bronchitis and the resultant discomfort makes her stop and think twice.