People with a smoking history are more vulnerable to chronic obstructive pulmonary disease, but passive smokers can also develop it 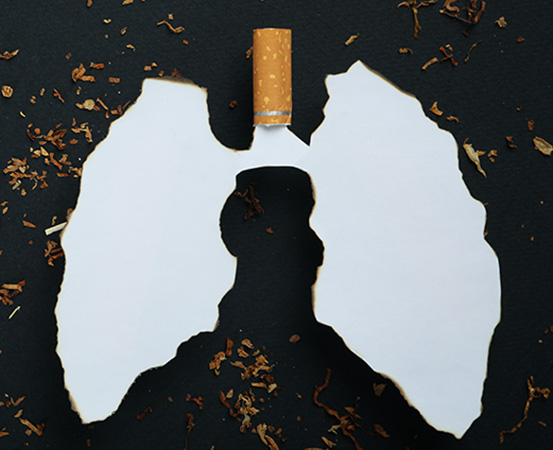 His typical day begins and ends with taking nebulisation, along with other treatment protocols. The man, once a carpenter who dealt with sawdust every day, coupled with an addiction to cigarette smoking faced typical symptoms of chronic obstructive pulmonary disease (COPD), a chronic lung disease in 2018. Satish, 61, Bengaluru (name changed) regrets that he battered his lungs as a living chimney with smoking addiction and his occupation, the latter for which he had no option but to continue the family business.

He is one among the many suffering from COPD, whose condition is linked directly to smoking and occupational hazard.

Speaking to Happiest Health, Satish mentions that he successfully quit smoking in the last four years and he is better with regular treatment follow-ups. “I have worked for over three decades amidst sawdust, making wooden furniture. The dust must have played a huge role, along with my addition to smoke,” says Satish.

What causes COPD? the causes for COPD is primarily cigarette smoking. But it also includes exposure to air pollution, breathing second-hand smoke, working with chemicals, dust and fumes and a history of childhood respiratory infection, apart from a genetic condition called Alpha-1 deficiency, according to the American Lung Association (ALA).

According to the ALA, when a cigarette burns, it creates more than 7,000 chemicals. The toxins in cigarette smoke weaken your lungs’ defence against infections, narrow air passages, cause swelling in air tubes and destroy air sacs, all contributing to developing COPD.

WHO mentions breathlessness or difficulty breathing, chronic cough, often with phlegm and tiredness as the key symptoms of COPD.

How does COPD affect the lungs?

According to the Centers for Disease Control and Prevention (CDC), in COPD, less air flows through the airways because of one or more of the following:

The prevalence of the lung disorder is increasing day by day, says Dr Davinder Kundra, Manipal Hospitals, New Delhi. He adds that COPD is also linked to poor air quality index, poor ventilation in homes, rapid urbanisation and construction activities that expose them to dust.

The youngest COPD patient that Dr Kundra has come across is a 35-year-old corporate professional who sought treatment in March 2022. “In his case, it was smoking at the age of 17 that led to COPD. He had become a chronic smoker and now he has landed up with acute lung issues. His chest X-ray showed hyper inflammation of both the lungs.

He had a severe obstruction in the pulmonary function test (PFT) and ended up with acute exacerbation. Whenever he used to climb stairs, he would run out of breath. He had a chronic cough in the morning. While I first thought he had an allergic cough, when he revealed that he had been a chain smoker for more than 15 years, all the parameters pointed to the definition of COPD. He is better now. He is taking inhalers daily. He did not require hospitalisation.

COPD can be diagnosed in the outpatient unit itself. The affected person’s smoking history, a chest history and pulmonary function test are all that’s required for a proper diagnosis,” says Dr Kumar.

However, many seeking treatment for typical COPD symptoms tend to hide their smoking history and think it’s ‘okay’ to smoke, says Dr Kumar. “They compare themselves with other smokers and feel they don’t smoke as much as other chain smokers. They don’t understand the body’s phenotype which is unique to everyone. They deny the history of smoking and do not disclose it. Some say they stopped smoking some years ago. But they deny the history of 30-40 years of smoking and presume that it’s not relevant to share it with the doctors,” says Dr Kumar.

Dr Kumar adds that hiding the history of smoking can affect the diagnosis and treatment too. “It’s the thirty years of smoking that has caused irreversible damage to the lungs leading to COPD. They think that they quit smoking five years ago and hence it has no relevance to their medical condition. They don’t understand that it has made irreversible damage. The symptoms are showing up now because of advancing years and a decline in lung function,” adds Dr Kumar.

Doctors say that in most cases, the person with COPD ends up in hospitals when the condition is moderate to severe, as initial symptoms are either ignored or the affected person resorts to self-medication.

While cough is the most common symptom of COPD, that’s the one most ignored, points out Dr Kumar. “Many say they have a normal cough. A cough cannot be normal, and there will be some reason behind it. Repeated cough, if it’s not settling, acute and with chest pain and wheezing needs to be checked by a pulmonologist,” says Dr Kumar.

Resorting to self-medication such as buying over-the-counter cough syrups and antibiotics and not taking proper treatment, can further reduce their lung function, he says. And when the condition worsens, they end up being on the ventilator, says Dr Kumar. He points out that the casual approach of people towards the symptoms of COPD has resulted in the disease becoming the second most common non-communicable cause of death in India, which in fact can be prevented.

There is an effective treatment for COPD if only the affected persons stick to the treatment regime and follow the instructions of the doctors, according to Dr Kundra. Inhalers, bronchodilators and nebulisation are used in the treatment of COPD.

In Satish’s case, he stopped working as a carpenter ten years ago as he could not breathe amidst sawdust. “I couldn’t walk for a few steps and felt breathless. Now, thanks to regular medication, my life is back to normalcy. I stopped working as a carpenter and quit smoking. I walk for two to three kilometres a day,” Satish says. Quitting smoking was also a key along with medication says Satish adding that it took him decades to realise the way the cigarette harmed his lung health.

Apart from sticking to the treatment regime, what COPD-affected persons must follow is to quit smoking and ensure healthy lifestyle practices, adds Dr Kundra. “Chronic smokers are usually undernourished and end up losing muscle mass. I advise them to take a high-protein diet. They must do deep breathing exercises. They must keep their indoor and outdoor environment clear. They must avoid going out for a walk or exercise when there is a poor air quality index. Avoid passive smoking too,” says Dr Kundra.

Though COPD is a persistent and progressive disease, the disease would remain mild if one quits smoking. People stop the usage of inhalers and end up witnessing the flare-up, he says.

The cases are seen among women too, usually during their middle age.  Spouses of chronic smokers, who end up becoming passive smokers may develop COPD. Women who use biomass for cooking are also vulnerable. Also, women who have suffered from bronchial asthma during their childhood or in their younger life may develop COPD later on in their lives.

Doctors point out that most people with mild COPD do not stick to inhalers. “There are also financial issues, socioeconomic factors, non-availability of inhalers and the taboo about using inhalers that factor to non-compliance of treatment,” says Dr Kundra.