The smokescreen effect of e-cigarettes

Can e-cigarettes help one move away from cigarettes? Or can they affect the lungs the same way cigarettes do? We find out 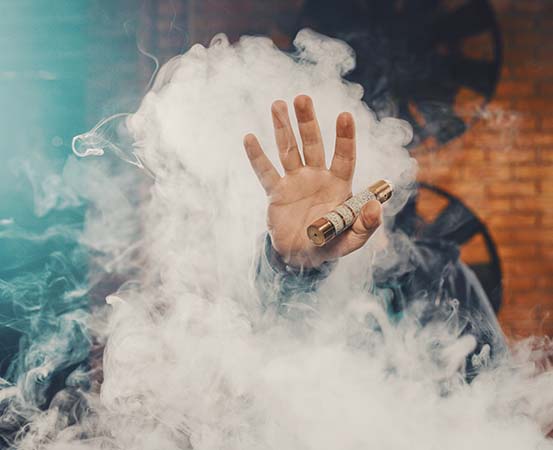 Electronic nicotine delivery systems (ENDS) or e-cigarettes have been in the market for a while now and their use as a replacement tool for quitting smoking tobacco has been debatable, leaving both users and doctors divided.

While some countries like New Zealand and Canada have legalised e-cigarettes with regulations, India imposed a complete ban on the sale and use of e-cigarettes in 2019. However, despite the ban, e-cigarettes are still being used by smokers claiming that it’s a lesser evil. Happiest Health spoke to users and experts to find out whether the device is harmful.

Indoor pollution: when the air inside your home turns toxic

The side effects of using e-cigarettes

Varun Harish (name changed), 25, a data analyst from Kochi, Kerala, recalls his experience of using a vape. “I used a vape to quit smoking but experienced breathlessness, nausea, lack of appetite and also couldn’t perform well while playing football,” he says. However, he quit vaping due to the adverse side effects, after a couple of months.

It’s not the same for Shurthi Das (name changed), 24, a brand solution manager in Bengaluru, who is addicted to vaping. What began as a recreational activity soon led to a minor addiction for her. “As soon as the vape notifies me that the cartridge is over, I feel the urge to find a replacement. I feel anxious when I don’t have access to it,” she says.

As American Lung Association mentions e-cigarette contains nicotine (which is extracted from tobacco), propylene glycol, flavourings and other chemicals. It’s the nicotine in the e-cigarette which makes it addictive, say experts.

Dr (Prof) Vishal U S Rao, director of head neck surgical oncology and robotic surgery, HCG Cancer Centre, Bengaluru, on the other hand, emphasises that e-cigarettes cannot be viewed as something that can replace cigarettes as it is merely a marketing strategy formulated by the tobacco industry.

“E-Cigarettes are novelty devices introduced to entice youth and now are successful at it,” he explains. “Nicotine falls in the poisonous category as it is a carcinogen and is harmful, causing cardiovascular and lung diseases due to its high toxicity levels,” he adds.

E-cigarettes seen as a tool for kicking the butt

However, there is a voice of dissent. Association of Vapers India (AVI), a non-profit organisation located in Mumbai, has been advocating the legalisation of e-cigarettes as a tool for tobacco cessation since 2016.

According to Samrat Choudary, the director of AVI, smoking involves the combustion of tobacco, which causes tar and is harmful, whereas a vape contains liquid and there is no combustion, making it significantly less harmful than smoking. Choudary says that though vaping is unsafe, it is a viable option to quit smoking. “It is important to check the quality of the device and the liquid present in it or else it would lead to side effects during the transition from cigarette smoking to vapes,” he points out.

Talking about the unregulated accessibility of e-cigarettes for the youth, Choudary adds, “AVI doesn’t promote or encourage non-smokers or underage children to smoke e-cigarettes. The situation is difficult to control due to the knockoffs that are being sold illegally in black markets.”

Like Choudary, there are others who believe that e-cigarettes are less harmful than cigarettes. Dr Kiran Melkote, an orthopaedic surgeon from Delhi and member of the Association for Harm Reduction Education and Research (AHRER), Mumbai, also believes that vaping is a less harmful pursuit than smoking cigarettes. “No experts or researchers have claimed that e-cigarettes are a hundred per cent safe, but our focus is on tobacco harm reduction,” says Dr Melkote. “Multiple studies show that the burning of tobacco can lead to harmful carcinogens being released. However, heavy smokers are switching to e-cigarettes since combustion is eliminated.”

But public health experts have been raising their voices against the use of e-cigarettes. Upendra Bhojani, faculty and director at the Institute of Public Health, Bengaluru, says that the long-term effects of e-cigarettes are being researched. He recommends abiding by the guidelines of the World Health Organization (WHO)  on the harmful effects caused by E-cigarettes.

According to Bhojani, the ideal way to overcome addiction to the smoking of tobacco products is by using Nicotine Replacement Therapy (NRT). NRT is the medically approved way to quit smoking and it contains small doses of nicotine in the form of gums, inhalers, nasal sprays and helps in gradually overcoming the craving.

Electronic nicotine delivery systems (ENDS) or e-cigarettes are marketed as devices that will prevent smokers from quitting tobacco. Studies are still being conducted to find out the long-term effects of these products and the harmful effects on the consumption of nicotine. However, it is concluded that nicotine is a carcinogenic substance and any product using it can pose cardiovascular and respiratory risks.