Warm and humidified air – the magic of nasal cannula

When you feel breathless and claustrophobic, a high-flow nasal cannula can come as a boon 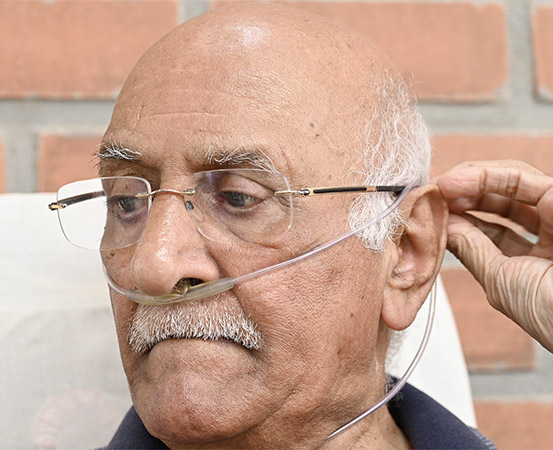 Fifty-one-year-old Tejaswini Murthy, who had claustrophobia, recalls how one of her worst fears came true last year: a tightly fitted oxygen mask was put on her as she was being taken to hospital in an ambulance. But there was an upside: the high-flow nasal cannula (HFNC) rescued her during treatment for pneumonia.

Hyderabad resident Murthy, who had been down with fever and cold for a week, had started feeling breathless. That was when her family called for an ambulance. Trying to catch her breath, Murthy panicked when the oxygen mask was put on her.

“I could not breathe, and the mask made it more difficult for me as the ambulance was a closed space and the mask added to my claustrophobia,” she says. “I was very uncomfortable and kept removing it to catch my breath. I was taken to the emergency room where the doctors told me that it was pneumonia and carried out a few tests. My saturation was 60 [normal saturation level must be above 95] and my HRCT score came out as 14 [a score between seven and 18 is considered moderate] when the doctors put me on oxygen mask.”

What is a high-flow nasal cannula?

Dr Satyanarayana Mysore, head of department and consultant, respiratory and sleep medicine, pulmonology, Manipal Hospitals, Bengaluru, says that in HFNC, the oxygen is delivered through mixed gas with pressurised air and, most importantly, humidified. “A positive airway pressure is created when the air is mixed with oxygen at the time of delivery,” he says. “It is non-intrusive, doesn’t appear like a mask that is tightly fitting on the face and will not cause claustrophobia.”

Murthy, however, was scared just at the thought of putting on the oxygen masks like some others in the emergency room. “I was shifted to a ward and the doctors informed me that they were switching me to high-flow nasal cannula,” she says. “I was not aware of how that would help until they removed my oxygen mask and inserted the nasal cannula. I felt a relief and the warm air made me feel more comfortable. On all the four days that I was admitted at the hospital, I kept wondering how difficult it would have been if there was no alternate option for me.”

Who requires an HFNC?

It is required for people with hypoxemia — that is, hypoxemic respiratory failure — whose saturation is less than 96, according to Dr Sree Sahitya, emergency medicine, Apollo Hospitals, Hyderabad. “Hypoxemia [low level of oxygen in the blood] could be due to pneumonia, cardiogenic pulmonary edema, COPD and asthma,” she says. “The usage of HFNC was initially started for the paediatric age group with respiratory bronchiolitis, but it is now coming into the picture after Covid due to its increased use and benefits.”

Dr Mysore says that people with diffusion abnormalities or conditions like interstitial lung disease (a group of disorders that cause progressive scarring of lung tissue), airway diseases where there is a mismatch of oxygen and carbon dioxide, require HFNC. “Two years prior to the pandemic, we had started using HFNC in the regular wards,” he says. “It later became a lifesaving tool during Covid as we increased the usage in the wards, while in many places they were still using it in the ICU. Using this in the ward served as a major advantage as we were able to space out the ICU for better requirement.

“During the first 24 hours of HFNC therapy the patients have to be monitored closely to identify the response to starting this modality of support.”

“People with pneumonia, pulmonary edema, COPD and asthma have a lot of secretion and impaired mucociliary function, which means one cannot cough out the secretions,” says Dr Sahitya, who is also vice-president, Association of Emergency Physicians of India. “The gases from the standard nasal cannula will be cold and dry, which increases airway inflammation and impairs mucociliary function.”

Humidified oxygen from HFNC helps in secretion clearance — for one to cough out all the secretion — and helps the inflammation to come down, she says.

Dr Mysore says that CPAP (continuous positive airway pressure) therapy will deliver one pressure throughout breathing in and out and, therefore, it builds up pressure within the airway and keeps the airway open. “Non-invasive ventilation is where different pressures are delivered during breathing in and breathing out,” he says. “HFNC works like a CPAP but also corrects the oxygen blood gas abnormalities — that is, the amount of oxygen getting mixed with the blood for every breath. If that aspect is low, HFNC can skilfully support the system till a definitive treatment is started.”

HFNC is an easy alternative to BiPAP (a type of ventilator that helps people suffering from respiratory distress breathe) since most people are not comfortable with wearing a tight-fitting mask and the majority of them feel claustrophobic, says Dr Sahitya. “People cannot tolerate the mask for a long time as they feel restricted and cannot remove or eat anything,” she says. “In many cases, the noncompliance of BiPAP often results in a person landing on a ventilator. But when the same person is shifted to HFNC, they will be very happy with it as it allows them to have their food and feel more comfortable.

“When a person has more than 30 to 35 respiratory rate, we go for BiPAP. If it comes down a little less than 30, we switch them to HFNC so that noncompliance of BiPAP won’t become a problem or land them on a ventilator.”

According to Dr Sahitya, in BiPAP there would hardly be about 20 to 30 per cent of oxygen in the six litters per minute of face mask as the person would be exhaling some amount of carbon dioxide and they again inhale the exhaled carbon dioxide and not the fresh oxygen. HFNC matches the person’s respiratory flow and gives a very high flow at almost 60 litters per minute. It will be a continuous flow of fresh gas with a very high flow rate and will be replacing the dead space inside the oxygen mask.

Not an alternative to a ventilator

Dr Sahitya says that the major advantage of HFNC is that it prevents the person from being put on a ventilator. “If the person is put on the HFNC at initial stage with high flow rate, the recovery chances are high and they can be prevented from landing on a ventilator,” she says. “Among people infected with Covid, once they land on a ventilator, they get secondary infections, and it becomes difficult to bring them back from the ventilator.”

However, Dr Mysore says HFNC should not be looked upon like an alternative to ventilation. “HFNC will tend to maintain a person’s saturation and it will serve as a bridge towards deterioration or recovery,” he says. “But there is a point of time where one needs to think and understated the problem rather than suddenly waking up and realising that HFNC has only delayed the inevitable.

“Some people will like HFNC, and some will like non-invasive ventilation. Overall, it is not about the device. It is about the person who sensibly recommends and uses and monitors the condition.”