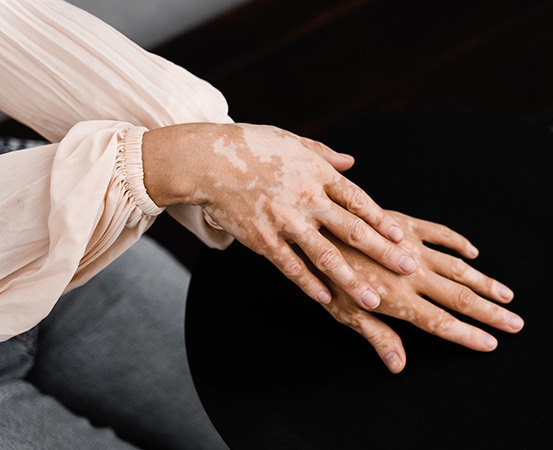 Maya Tulpule was just ten when she first spotted white patches on her body. The medications prescribed by the dermatologist helped in getting rid of 95 per cent of the patches gradually.

Tulpule realised it was vitiligo, a skin disorder, when she enrolled into a medical school. About 5 per cent of the white patches remained static over the next 30 years.

“Suddenly in my 40s, it started spreading again, leading to me getting completely depigmented in six months,” says Dr Maya Tulpule, who is now a general surgeon practising in Pune, Maharashtra.

Dust mites can hurt your might with allergy
Why athletes alone don’t get athlete’s foot
Bump ahead: goosebumps that turn red, don’t go away
Psoriasis: Getting under the skin

Vitiligo, also called leukoderma, is a condition characterised by significant white patches on the skin. It is caused by a loss of colour in the affected areas due to depigmentation. While it can occur in people of any skin colour, the discoloration is more noticeable on darker skin.

Dr Tulpule remembers being subjected to prying eyes because of her condition, which led her to withdraw from many social situations. “The stigma associated with vitiligo is disproportionate,” says Dr Tulpule. “It is not a contagious disease, it doesn’t affect any other functioning, then why the stigma?”

The stigma suffered by those with vitiligo and also her own life experiences drove her to start a support group called Shweta Association in Pune in 2001. ‘Shweta’ means ‘white’ in Marathi.

Dr Anil Abraham, dermatologist, Abraham’s Skin & Hair Clinic, Bengaluru, says the four types of vitiligo are characterised based on the period in life during which they appear and the extent of the patches:

Vitiligo is an autoimmune disease in which the body’s immune system attacks the melanocytes. “Melanocytes are like the factories in the human skin producing the brown pigment melanin,” says Dr Abraham. “The destruction of the melanocytes makes the skin look white. Trauma or injury that results in a scar can act as a starting point for vitiligo. Foot-wear dermatitis, which occurs from wearing poor-quality rubber chappals, can give rise to a white patch on the area which can potentially develop into vitiligo.”

Not all white patches are vitiligo

Dr Abraham says there is also chemical leukoderma caused by adhesive sticker bindis and poor-quality sindoor (vermilion powder). But he says not all discolouration is vitiligo and recommends clinical diagnosis at the hands of a qualified dermatologist.

According to Dr Smriti Naswa Singh, consultant dermatologist and fellow paediatric dermatology, Fortis Hospital, Mulund, Mumbai, friction between skin and a wearable, adhesive item can cause lesions on the skin that may develop into vitiligo. She says friction can occur due to wearing rubber or plastic footwear, rings, wristwatches and earring tops. When these items are in prolonged contact with the skin, the friction can act as a trigger point for vitiligo.

“The area where you tie your sari over the years can become another chronic friction area and people can get white patches even if they do not have vitiligo. If you have vitiligo, you’re more likely to get it there,” says Dr Naswa.

Dr Abraham stresses the importance of early diagnosis and prompt treatment of the condition. “Most of the time the problem worsens because people try out non-scientific methods of treatment. By the time they come to a qualified doctor, it is already widespread and totally out of control,” he says.

Dr Naswa says that the complexity of the treatment increases with the delay in diagnosis. “When someone starts with a localised single patch of vitiligo, it can be treated with creams, ointments,” she says. “If it goes on to multiple patches, tablets and other measures like phototherapy and surgery options are suggested. So, it’s always better to treat early because we teach them how to control the spread. If there is a single patch and the medical treatment has failed, we have phototherapies wherein we give UV therapy. This is especially helpful during monsoons, in the absence of sunlight.”

Dr Abraham says certain medicines that correct the autoimmune process and allow the skin to get pigmented again are also administered. “There are also surgical procedures that include melanocyte transfer, the transfer of the cells which produce pigment,” says Dr Abraham.

Several myths float around about vitiligo — ranging from the nature of the disease to its treatment. Dr Naswa says that the stigma associated with vitiligo largely arises from its patches resembling leprosy, a contagious disease that was previously incurable and led to a disfigurement of the hand and feet. Vitiligo being called safed kushtarog (white leprosy) in some parts of the country adds to this misconception.

“Many people believe that if you have fish and curd together, it causes vitiligo. There is also a myth that people with vitiligo should avoid sour food. There is no scientific proof to support either of these dietary connections to vitiligo,” says Dr Abraham.

Dr Tulpule recounts her experience of receiving unscientific advice like applying the soil of tulsi Vrindavan (holy basil), ground whetstone (a fine-grained stone), plant roots to cure the patches. “These measures are not only futile but can also act as roadblocks to attaining the right treatment,” she says. ‘Vrindavan’ here refers to a cuboid stone or brick structure raised in the middle of a house’s courtyard or in front of the house.

The stigma associated with vitiligo can lead to psychosocial issues like low self-esteem, depression and anxiety. Dr Naswa points out that mental stress can trigger newer patches. Counselling can help the person and their families ease the psychological burden of the condition. “Most doctors have a separate session to counsel the patients and help them understand the disease and deal with the social issues related to the disease,” says Dr Abraham.