Home
Articles
Bach therapy for the blues: Why you should stop to smell the flowers
0

Bach therapy for the blues: Why you should stop to smell the flowers

A package for the mind, body and spirit, say its therapists

In 2016, Delhi-based fashion designer Gauri Singh suffered a blow to her morale when she realised that she had gained over 20 kgs.

Her profession demanded that she looked a certain way and this drove her into trying out different fad diets, even starving herself at times. At 40, it was not easy to lose weight and the pressure of maintaining a peer-approved image began to affect her mental health.

Feeling physically and mentally at her worst, she sought counselling but it neither melted the stubborn fat nor raised her self-esteem.

In 2019, she got introduced to Bach Flower Therapy through Pallavi Bhardwaj, a holistic health and lifestyle coach and co-founder of Save Well Being, a Delhi-based wellness products company.

Bach flower therapy is a holistic healing package that uses flower tinctures to treat a range of conditions like depression, anxiety,  and even chronic lifestyle disorders like diabetes, high blood pressure and obesity.

Like many others, Singh was at first sceptical of help coming her way from flower tinctures.

“The aim of the therapy was to inspire Gauri to change her unhealthy habits like diet and sleep pattern,” says Bhardwaj.  “It pushed Gauri to expand her limits and encouraged her to come out as a healthy individual.”

She says she started seeing results from the first week. As Gauri Singh’s attitude towards food and life gradually changed, she lost about 25 kg in six months and gained back her self-confidence.

Bhardwaj says, “The therapy works on the internal emotional wiring of a person and has proven to be one of the effective ways to deal with concerns such as Gauri’s.”

Gauri Singh, she says, is just one of the hundreds of others who have benefitted physically, mentally and emotionally from a treatment that uses customised flower tinctures.

Among them are people suffering from a host of conditions such as anxiety, cancer, diabetes, hypertension and obesity.

The origin of Bach flower Therapy 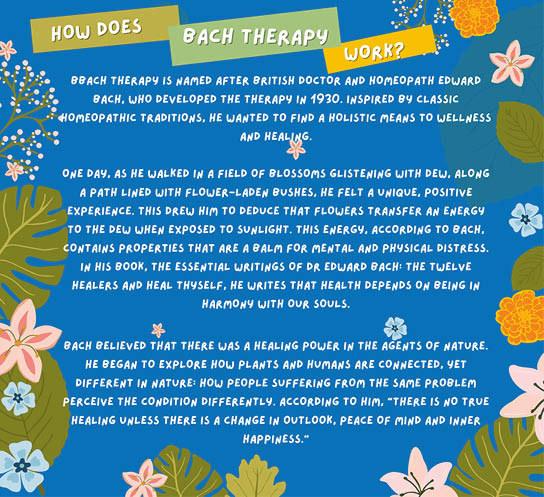 “There are 38 identified flowers in this therapy,” says Bach Flower therapist Gita Hariani. “Their pure essences help one to heal any emotional imbalances that may arise because of negativity, anger, jealously, loneliness or burnout,” she says.

Hariani likens it to a magical potion that can be administered to anybody, from a new-born baby to elderly adults, even pets and plants. “It has absolutely no side-effects,” she says.

Bhardwaj says that the Bach flowers come from trees, shrubs and wild ground covers. “The tinctures are usually purchased and we do the mixing as per requirement. Sometimes, only one flower tincture is used or at times, five to six flowers are used to create a customised tincture based on the nature of the issue and its severity.”

According to Dr Bach’s book, the flower remedies are preserved in 27 percent grape alcohol. One can consume two drops of the appropriate remedy directly from a stock bottle or mix it in a glass of water and sip it.

The remedy can be sipped at intervals until symptoms improve. In the case of long-term use, up to seven tinctures of choice can be added. They are said to work subtly to iron out negative emotions.

“The consumption is mostly oral. I also prepare oils that can be applied externally. The preparation of mother tinctures is a combination of science and energy from the plant and the sun,” Bhardwaj says, reassuring us that flower remedies have no side effects,

According to her, flower therapy not only heals one of a specific issue, but also repairs connected and often unidentified problems in the process.

For Mumbai-based journalist Sneha K, travelling always got her nervous. “I would lose sleep about week prior to the travel. Spontaneous trips were not on my cards at all,” she says. “I used to fret about everything — from missing out on packing important things to the possibility of an accident. And once inside an aircraft, I would profusely sweat, right from take-off until landing.”

A friend suggested taking a break from work and joining a yoga session at the Art of Living centre in Mumbai. “I met a faculty member at the centre who was also a Bach Flower practitioner. It was the first time I heard this terminology. Although doubtful about it, I decided to try it out. I explained my case to him and he gave me a small bottle of tincture,” says Sneha.

“I had a work-related travel to Kerala a couple of weeks later. I began taking the tincture twice every day as prescribed. I could sleep better from the very first week, and I was calm before the travel and during the flight. I did not feel any sweating or anxiety,” she says.

The duration for healing depends on the condition being treated, the mental state of the person and the attitude towards the therapy. According to Bhardwaj, the biggest challenge is to work with different mindsets.

“People fear change, for example, if they are asked to change their food pattern. When I asked my clients to give up certain types of food that were not good for their physical health, many found it difficult. Later, I started tapering them off or add substitutes.”

“Look at it from the pet’s perspective: is it trauma? Or abandonment?” The therapy treats shock, trauma and anxiety because of mistreatment. It works in three to six months.

Pet parents can give the drops directly, mix the tincture with their pet’s food, rub a few drops behind their ears or on their paw pads when they are stressed out.

Questioned by modern medical practitioners about its credibility and called a pseudo-therapy, Bach has its therapists vouching for its use in treating chronic diseases which could not be treated by doctors.

According to Bhardwaj, “Most people who suffer from chronic issues have an underlying emotional issue. It is important to heal the emotional aspect first and then the physical issue.”