Home
Articles
Food poisoning, stomach flu are not the same
0

Food poisoning, stomach flu are not the same

When the stomach is in knots, followed by sudden nausea after a heavy meal, it may be difficult to conclude what the culprit is. Stomach flu or food poisoning?

For Ramya YG, an HR manager and foodie from Bengaluru, a sudden wave of fatigue after a heavy meal was confusing. Just when she believed she had the condition under control with a glass of warm water and lemon juice, diarrhea set in keeping her awake the entire night.

“The stools went from semi-solid to completely watery and by morning I had a dry mouth due to dehydration,” she says.

According to the Centers for Disease Control and Prevention (CDC), stomach flu can spread through contaminated food, water and surfaces or direct contact with someone who is infected with norovirus or rotavirus (in children). Young children, the elderly and people with other medical illnesses are most at risk.

The presence of microbes like viruses, bacteria and parasites in the food can cause food poisoning as per the National Institute of Diabetes and Digestive and Kidney Diseases (NIDDK). Infants, children, pregnant women, their foetuses, older adults and people with weak immune systems are most susceptible. The contamination can occur at any stage of growing, harvesting or slaughtering, processing, storing, shipping and preparing food. The sources are the people handling the food, contact with already contaminated food, contaminated area or equipment, or any carriers of the pathogen (insects, vermin, etc). Microbes can grow if people don’t cook food thoroughly or promptly refrigerate or freeze food that can spoil.

When home remedies didn’t help, Ramya visited the doctor who diagnosed her condition as food poisoning and prescribed antibiotics.

Are any tests required?

“For the first two days, I had only diarrhea, but from the third day onwards I experienced severe vomiting,” recalls Ramya.” After a week-long rest and liquid diet, the motions and vomiting were under control.”

However extreme fatigue prompted Ramya to see the doctor again and he asked for a blood test to check her blood count.

Dr Varakanahalli says routine stool tests further help in diagnosis as the two conditions may have overlapping symptoms. Inflammatory markers are advised to assess the severity of the inflammation. But these are necessary to gain clarity only when the symptoms don’t subside within three to four days. “It is also important to differentiate between diarrhea and dysentery in which stool examination and symptom evaluation might help.”

Dr Rohith M, consultant surgical gastroenterologist, Prakriya hospitals, Bengaluru tells Happiest Health that one indicator of the type of infection could be the presence of mucous and blood and the consistency of stools. Watery diarrhea is usually viral in origin, and stools with blood and mucous are caused by a bacterial infection. 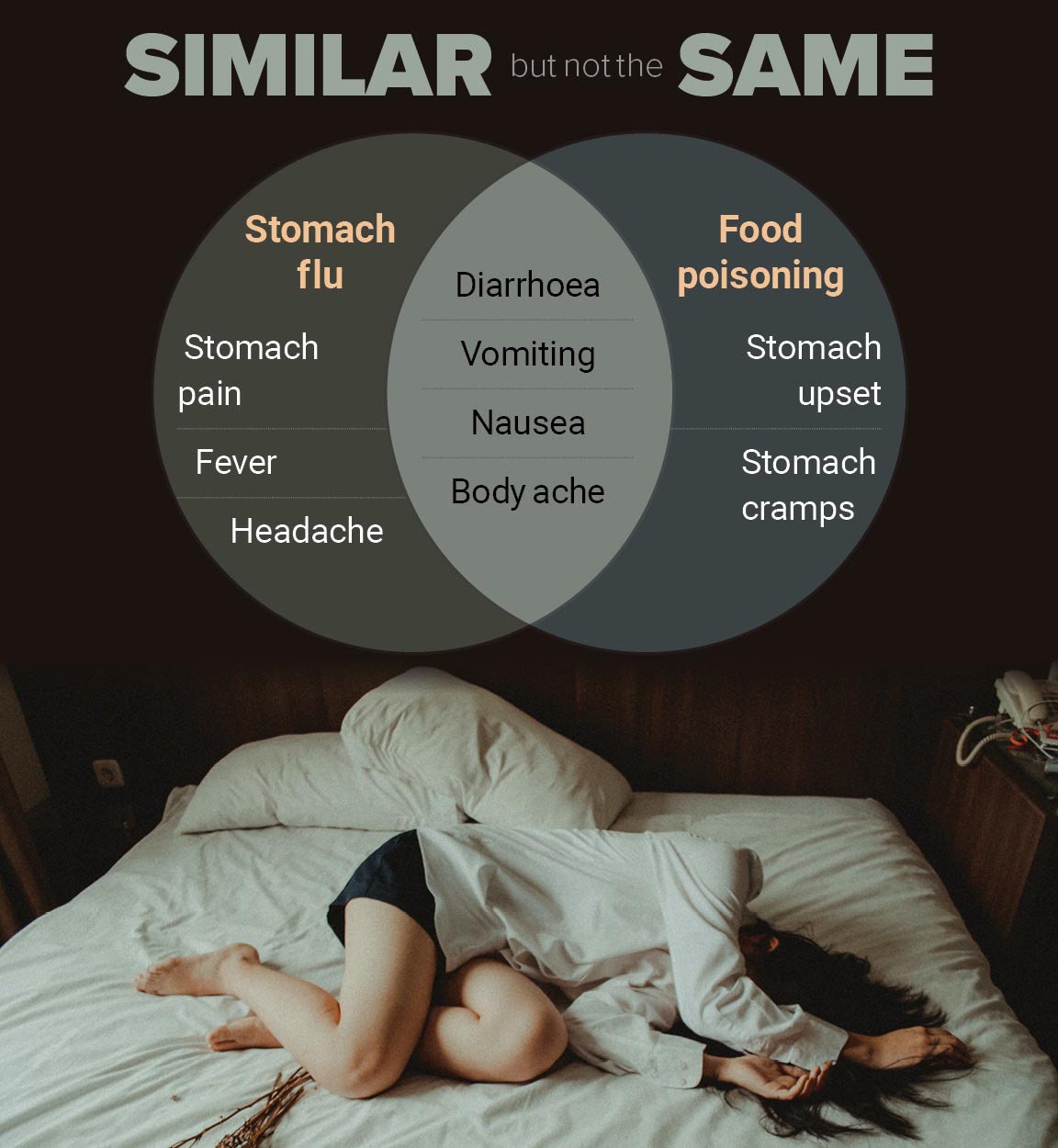 The line of treatment

“The treatment is symptom-based for all infectious gastroenteritis conditions. Most patients start feeling better once their predominant symptoms are addressed,” says Dr Varakanahalli. He says that antibiotics are advised only if there is a high fever and severe abdominal pain. Antispasmodic pills are given for pain and antispasmodic pills are administered for diarrhea.

Dr Varakanahalli also warns people about opting for home remedies and over-the-counter drugs. “These may reduce the levels of toxins in the body and hence help people feel better initially but consulting a doctor is always advisable to avoid complications.”

Professor Altaf Patel, director, department of medicine, Jaslok Hospital Mumbai, says that over-the-counter (OTC) drugs such as loperamide that stop diarrhea temporarily paralyse the gut. He points out that if intestinal movement stops, the bacteria from the gastrointestinal tract enter the blood and start circulating throughout the body increasing the chances of infection.

Tasneem Nalwala, a dietitian with the National Health Service (NHS), UK, tells Happiest Health about dietary interventions in gastrointestinal conditions. She says that intervention is individualised for every person depending on their nutritional assessment. The aim is to alleviate the nutrition impact symptoms and meet estimated energy and protein requirements. “Hydration is key, with emphasis on electrolytes and eating little and often. Although multivitamins are only prescribed as per biochemistry reports and degree of malabsorption, we recommend Vitamin D supplements for winters in the UK due to lack of sunshine,” she says.

Samyukta Raju, a Bengaluru-based nutritionist stresses the importance of soothing the gut with prebiotics and probiotics, and rehydrating the body with water or electrolytes. In the recovery phase, there is a need to stabilise and replenish the very weak gut after washout and aid the recovery of muscle loss. A soft diet is advised, rich in vitamins and minerals yet low in fiber, dairy products and citrus foods, she says.

Ramya recalls, “My main concern was the extreme fatigue and dryness in the mouth. Hence, I was on a complete liquid diet for the first couple of days and gradually moved to a semi-solid bland diet, to rehydrate myself and regain energy.”

Though Dr Rohith points out that untreated stomach flu could lead to severe dehydration, acute kidney injury, and electrolyte imbalances which may be fatal for the heart and lead to death, Dr Varakanahalli says that most people suffering from food poisoning vs stomach flu, recover within a few days, without developing complications.

There are multiple studies that indicate the development of complications from stomach flu and food poisoning.

A 2017 study published by Plos One, a peer-reviewed online scientific journal, found that viral gastroenteritis can have lasting effects on the body’s microbiome balance (the number of good bacteria). One out of five affected with norovirus showed significant microbiota alterations leading to health complications in some cases.

Another 2009 study published by the World Journal of Gastroenterology, found that post-infectious Irritable bowel syndrome (IBS) affects five to 32 percent of those who experience gastroenteritis.

A common consequential occurrence of Acute Kidney Injury (AKI) among patients hospitalised for diarrhea was also indicated by a 2018 study published by in the Journal of General Internal Medicine.

But Dr Varakanahalli clarifies that only prolonged symptoms in both conditions can lead to dehydration which causes kidney and organ failure. He says other complications like botulism, necrotising enterocolitis, reactive arthritis, and septic deposits can develop due to certain specific microorganisms. “Although they are very rare instances,” he says.

Once bitten twice shy, Ramya is conscious of her choice of food now. Though she loves street food, she ensures to eat only from places that are hygienic. “When I order, I ensure that it’s cooked well and served hot. And if I carry home leftovers, I refrigerate them immediately and try to consume them on the very same day,” she says.