Home
Articles
The connection between UTIs and diabetes
1

The connection between UTIs and diabetes

While high glucose presence in the urine of diabetic people makes them more susceptible to UTIs, practising genital hygiene and managing blood sugar and pressure levels could keep UTI-causing microbes away 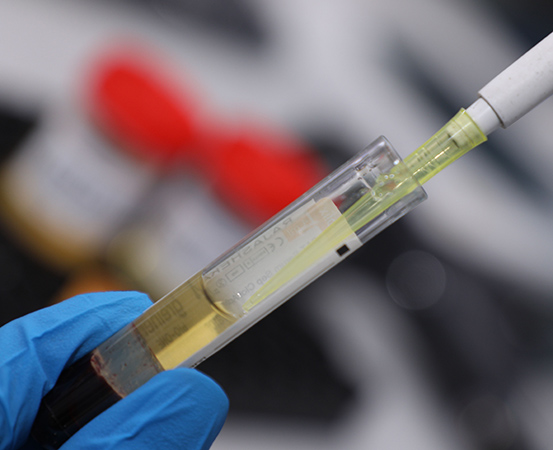 A urinary tract infection could develop due to microbes entering the urinary tract and affecting any part of the urinary system. While anyone can get a UTI, those with diabetes are twice as likely to develop the condition. The reason? High glucose concentration in the urine, which makes for an ideal breeding ground for bacteria. Glucose can provide bacteria with an abundant supply of food, allowing them to grow, proliferate and trigger serious infections. This makes it imperative for people with diabetes to manage urinary tract infections with early diagnosis and appropriate medication.

“I was diabetic during my first pregnancy at the age of 19. But it was not an issue during my second and third pregnancies. Later, at the age of 34, when I underwent tests for back pain, it was found that I was diabetic. Since then, for the past ten years, I am under medication for diabetes. Almost around the same period, UTI problem also started cropping up for me. Frequent urge to pass urine was the main concern I faced, almost preventing me from travelling for long distances without taking frequent loo breaks. I am 44 now, and my UTI problem seems to have subsided since the past one year, and my diabetes is also well managed,” shares Maya (name changed), a beautician from Idukki in Kerala.

Why a sudden blood sugar crash could be serious

Working out with diabetes

The overlooked silent stage of diabetes

UTI and its many forms

Usually, the immune system eliminates germs from the urinary tract before they can multiply. However, damages to the nerves can prevent the bladder from emptying the toxins by weakening the muscles or confusing the signals that travel from the brain to the urinary system. And a prolonged retention of urine only increases the risk of infection.

The diabetes and UTI link

People need to practice proper genital hygiene to avoid contracting UTI, advises Dr K Jagadeesan, a diabetologist based in Chennai. “Various studies have found that there are some key factors that can cause frequent UTIs in diabetics. As the disease-causing bacteria can grow when there is more glucose in the urine, a portion of the kidney called the renal parenchyma experiences high glucose levels, which creates an ideal environment for the growth of microorganisms and ultimately leads to an infection of the kidney. Also, people with diabetes have compromised innate, cellular, and humoral immune systems, which makes it easier for disease-causing bacteria to infect them. Diabetics with nerve damage (neuropathy) in the urinary tract may experience urinary retention and improper urination, which could hinder the flushing of bacteria from the body and increase the risk of infection. According to studies, diabetic neuropathy causes bladder dysfunction in 26 to 85 per cent of diabetic women,” he elaborates.

Several studies reveal that type 2 diabetes with infections most frequently affect the urinary tract. So, it may be concluded that UTIs may be caused by a variety of immune system dysfunctions as well as poor metabolic control from diabetes and insufficient bladder emptying brought on by autonomic neuropathy (UTI). Age, metabolic control, and long-term complications, particularly diabetic nephropathy (kidney failure) and cystopathy (bladder dysfunction), have all been found to increase the risk for UTI in diabetics.

Essentially, in people with diabetes, certain immune response systems are hampered due to lesser T cells and white blood cells that defend against foreign bacteria, viruses, and fungi.

When a heightened risk of UTI is caused by increased sugar levels in the blood and urine, symptoms include discomfort and urgency when urinating, back pain, pressure in the area around the pubic bone or in the rectum, weakness, fatigue, nausea, and fever.

While women with diabetes are more prone to contract UTIs, it is also common in men, according to a study from the UK’s General Practice Research Database (GPRD).

According to a study conducted in Saudi Arabia, high blood pressure, insulin therapy, a body mass index (BMI) over 30 kg/m2, and nephropathy could increase the risk of UTIs in people with diabetes. People with diabetes may lose sensory function over time. This could make it difficult for them to realise whether one has the urge to urinate. As a result, people may wait for too long before they release the pressure on their bladder. Moreover, if urine remains in the bladder for too long, it may increase one’s risk of developing a bladder or kidney infection.

Constant urges to urinate, pain or burning sensation when urinating, urine with a bad odour, pain in the back and abdomen, blood in the urine, diarrhoea, high fever, chills, and vomiting are some signs and symptoms of urinary tract infections.

Dr Prasanth Arun, a consultant physician and diabetologist at the MV Hospital for diabetes in Chennai, pointed out that high sugar levels in urine due to diabetes are a matter of concern as the urine serves as an excellent culture medium for bacteria.

“In the past, diabetes was diagnosed by dropping urine on the floor and causing an ant to move toward the urine. UTI is most commonly found in people with uncontrolled diabetes. Presence of urine sugar is the main factor. Also, when you have diabetes, you will become immunocompromised, which is also a reason for developing UTI. Many diabetics who have UTIs ignore the condition because they have no symptoms and are unaware that they have the condition. In these situations, we detect bacteria, pus cells and leukocytes from the urine test during the routine outpatient check-up. If there are more than 8 to 10 pus cells, we ask them to perform a urine culture. From this, we identify the organism and advise them to begin taking antibiotics. The earlier we treat UTIs, the better, as people who ignore it run a higher risk of developing kidney disease or pyelonephritis. People often don’t take UTI seriously. Those who ignore our advice to undergo a urine culture often return a few days later with acute pyelonephritis or pus in the kidney. There have also been instances where untreated UTIs resulted in pyelonephritis and required dialysis,” reveals the doctor. 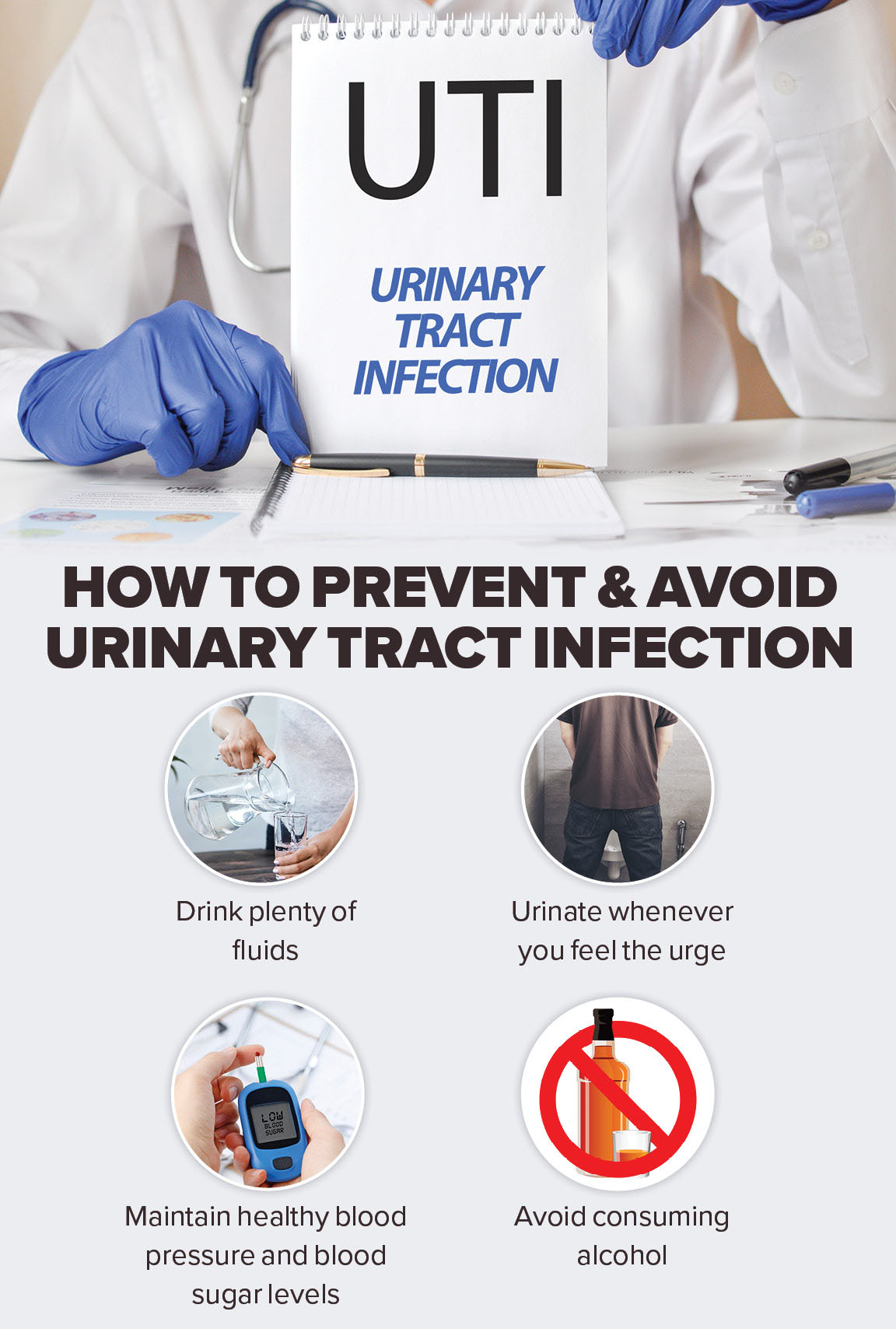 The symptoms can be managed and the infection can be stopped from spreading with quick medical intervention. Sometimes, untreated UTIs can lead to serious problems like kidney damage or even kidney failure. Doctors, therefore, suggest that the susceptible group drink plenty of fluids, urinate whenever they feel the urge, maintain healthy blood pressure and blood sugar levels, and avoid consuming substances that irritate the bladder, such as alcohol, to prevent UTI.