When red blisters appear on a child’s hand and foot

Hand, foot and mouth disease, a viral infection, is usually self-limiting and mild. Doctors even term it one week’s illness 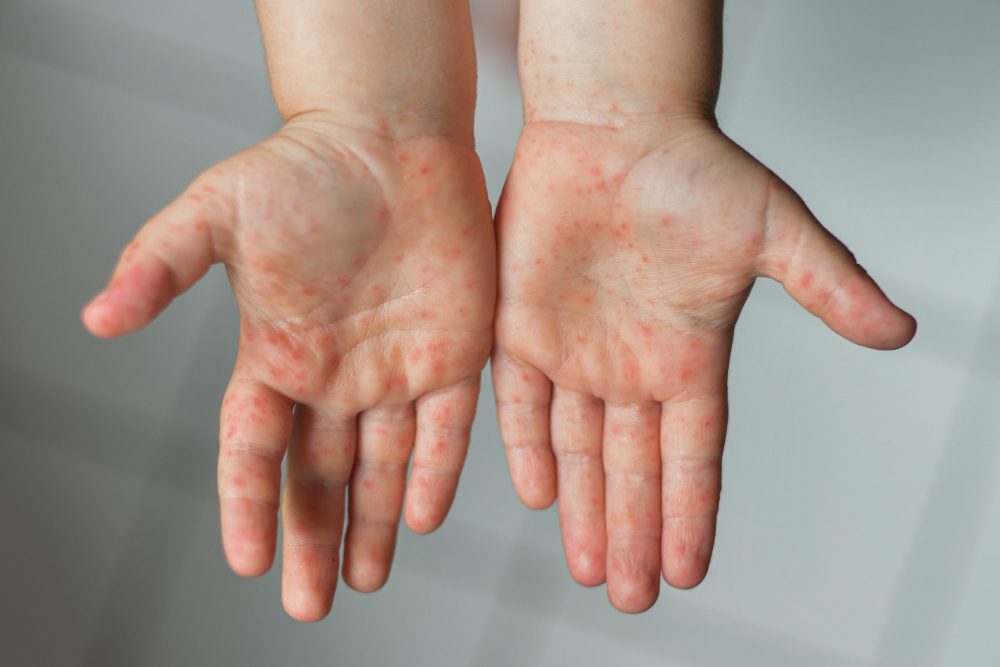 Red rashes on children’s hand, foot and mouth can prove to be tough to manage since they make it difficult for the little ones to eat and also make them irritable. Such rashes are the typical symptoms of hand, foot and mouth disease (HFMD), a pediatric infection seen in early age.

Avinash Ganesh, a parent from Bengaluru, recalls that his three-year-old son had a tough time when he suffered from HFMD. “The ulcer-like blisters in the mouth appeared to be more painful than those on the hands and legs. My son refused to eat, and he was only on fluids. While the fever reduced within three to four days, he was very irritable,” the father said. After the child fell sick, the family learnt that three other children in the same playschool and apartment had suffered from the same infection.

In HFMD, one of the most common childhood infections, the child begins to show symptoms after two days of getting infected, says Dr Mahesh Kumar, consultant, internal medicine, Narayana Health City, Bengaluru.

“The symptoms of HFMD start as red rashes and develop into blisters. This illness can also be accompanied by symptoms such as fever, nausea, vomiting, fatigue and sometimes irritability,” says Dr Kumar.

“It’s a mild disease which causes rashes on hand and foot and mouth ulcers and some rashes on buttocks with mild fever, but mouth ulcers are a bit painful and need symptomatic treatment,” says Dr Parvinder Singh Narang, director and head of department of pediatrics, Max Super Specialty Hospital, Shalimar Bagh, Delhi. He says HFMD is caused due to the coxsackie virus.

Dr Kumar says HFMD is common in children under five years old, but anyone can get it. “It spreads quickly at schools and day-care centres,” says Dr Kumar.

Dr Narang says the infection generally spreads in nurseries and school and involves small children. “This viral infection — like other infections — gives immunity and happens once in lifetime, so is seen less often in adults,” he says.

Dr Kumar says that in general the disease spreads through close contact, coughing and contaminated objects. “One can prevent this disease by maintaining good hand hygiene (like frequent hand washing), wearing a mask, eating healthy homecooked food and fruits, and keeping the indoors and outdoors clean,” says Dr Kumar.

Dr Benny Benjamin, senior consultant pediatrician and neonatologist, Fortis Malar Hospital, Chennai, says, “[HFMD] affects the hands, feet, bum and mouth. It starts with pimple-like spots which expand to bigger blisters. In the mouth it comes as red spots and ulcers. It is associated with fever in the beginning and later goes. In the next few days, more lesions come in the arms, elbows, knees, feet, buttocks and back of the palate. There is no vaccine for HFMD, he says.

Dr Benjamin says that in those infected by HFMD, the skin spots keep increasing over a few days but stabilise after three to four days. “By the end of one week the blisters become dry, brown and scab-like. And they peel off in the second week — that’s the natural cycle of the viral infection,” he says.

He says it spreads rapidly from one child to another. “Sometimes I have seen a second episode, which means there is more than one strain of the virus causing the infection,” Dr Benjamin says. He adds that older children and adults seem to be immune to HFMD through previous exposure.

Dr Narang lists out the measures with which HFMD can be prevented:

“The illness is usually not serious, but it is very contagious,” says Dr Kumar, adding that it spreads by skin-to-skin contact through handshakes, hugs with an infected child, through airborne respiratory droplets when the infected person coughs or sneezes, and also by saliva (kissing, sharing food/drinks).

Dr Narang says children in schools and nurseries are the most vulnerable. The disease occurs in clusters and more in the monsoon season. “If a child is unwell, the parents should take him to a doctor and give symptomatic treatment,” he says. “Generally, no tests are required to diagnose this disease.”

Dr Benjamin says, “I call it one week’s infection that affects a child’s eating and swallowing due to mouth lesions. They must be given easy-to-swallow, liquid, non-spicy food and hydration must be maintained.” HFMD does not usually require hospitalisation and it can be managed at home, he says.

Like other viral infections, it is self-limiting. The treatment is symptomatic with paracetamol, body lotion, gel lotion for mouth ulcers and antihistamine if required. It gets better in five to seven days. The treatment involves paracetamol, apart from lot of fluids and reassurance for parents,” said Dr Narang.

Dr Kumar says parents should take precautions when a child has symptoms of HFMD. “Washing hands with soap and water often is a must. Hands must be kept away from the eyes, nose and mouth. Disinfect counters, doorknobs and other surfaces that people frequently touch,” says Dr Kumar.

Mistaken for other infections?

Doctors say the red rashes seen in HFMD sometime get mistaken for other similar infections by the parents. “It may look like measles and chicken pox but is mild and settles in five to seven days,” says Narang.

Dr Benjamin says, “We can identify this viral illness by the appearance of the blisters, as they are confined to specific areas of the body such as hand, feet, mouth and bum.”

The infection is also mistaken for allergic rash and chicken pox by parents, say doctors. Dr Benjamin says sandpit play can cause rashes in the hand and feet, but they won’t look like blisters typical in HFMD. “Also, allergic rashes are not seen in the bum and the mouth, which distinguishes HFMD. Chickenpox is similar looking but it’s not in the peripheries, but the blisters are more on the body trunk. The distribution is different in chickenpox. Chickenpox cases are not much seen as most children are vaccinated against it,” says Dr Benjamin.