Enuresis or night-time bedwetting may be frustrating for parents, but it is not always a serious condition and goes away on its own in most kids, say doctors 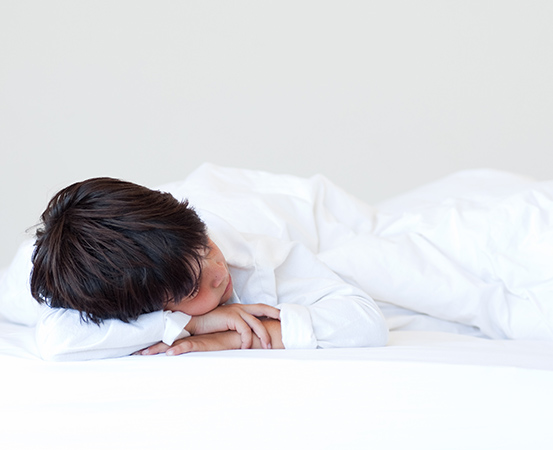 Alam Khan recalls a time from his childhood. “In my dream, everything would be set for me. A full bladder, the toilet seat and the readiness to pee,” says the 20-year-old engineering student from Mumbai. “It was only when I woke up, that I would realise that it wasn’t in the toilet where I peed, but on my bed!” he says. Khan and his family underwent significant stress due to his leaky episodes in his childhood. However, data reveals that his condition is not uncommon. Around 1.4 per cent to 28 per cent of children between six and 12 deal with nocturnal enuresis (nighttime bedwetting) worldwide.

“Enuresis or bedwetting is defined as discrete episodes of urinary incontinence during sleep in children less than or of five years of age,” says Dr Yogesh Kumar Gupta, consultant- paediatrics, Fortis Hospital, Bengaluru.

Don’t let jet lag slow you down
The power of the nap
Embrace these habits and sleep like a rock
WEBINAR Sleep habits: how to learn the trick?

According to Dr Sudhanshu Grover, consultant, neonatologist and paediatrician, Cloudnine Group of Hospitals, Chandigarh, bedwetting or enuresis is also frequently reported in children after an age at which staying dry at night can be reasonably expected.

Dr Manish G Ramteke, consultant, neonatologist and paediatrician, Cloudnine Group of Hospitals, Mumbai, adds that if the child is not dry by the age of five, it does not mean that the child is not normal. He says it’s okay to wait for a few more years, provided that the child has no other physical or mental health concerns.

The National Kidney Foundation – a US-based health organisation says, ‘there are two kinds of enuresis:  primary and secondary. Someone with primary enuresis has wet the bed since he or she was a baby. Secondary enuresis is a condition that develops at least six months — or even several years — after a person has learned to control his or her bladder.’

Enuresis: More of a parents’ dilemma?

Khan grappled with the condition till he was eleven years old, and his mother tried everything she could to control the unpleasant episodes – reducing the intake of liquids an hour before bedtime, a visit to the loo before he tucked himself in bed and rubbing balm on his lower abdomen. But when nothing seemed to work, she would leave fresh sheets with a pair of clothes beside his bed every night.

“Bedwetting or enuresis is more of a concern for parents than an actual health issue,” says Dr Ramteke.

“My mother’s dejection was evident and understandable,” recalls Khan. “Washing the soiled sheets every day was a tedious task,” he says and remembers the helplessness he felt every single morning. “No matter how hard I tried, I would still wake up to a wet bed,” he recalls.

Dr Grover acknowledges the fact that night-time bedwetting can be frustrating and can have far-reaching effects on both the child and the family. “It may interfere with a child’s socialisation, lead to guilt, embarrassment and consequently low self-esteem,” he says.

However, he is quick to add that the not-so-serious medical condition is no one’s fault and should be handled with patience and understanding.

Dr Gupta says the condition goes away on its own in most children and insists that children should not be punished for bed-wetting.

The reasons for a wet bed

According to Dr Ramteke, one of the reasons could be a development issue where the child has not developed sufficient control over the urinary bladder muscles. “It does not need any treatment and the condition subsides as the child gains control over those muscles,” he says.

The medical causes Dr Ramteke states for bedwetting are urinary infections, chronic constipation, diabetes, thyroid issues, sickle cell disease and rare congenital abnormalities of the genito-urinary system; he advises that the child be promptly evaluated for the underlying condition.

Dr Grover says that bed wetting could be because of the nerves. If the nerves that control the bladder are slow to mature, a full bladder may not wake up the child when in deep sleep. He also cites hormonal imbalance (inadequate production of anti-diuretic hormone (ADH) to slow night-time urine production), stress (events like starting a new school, sleeping away from home or conflicts between or neglect by parents), sleep apnea (breathing interrupted during sleep due to inflamed or enlarged tonsils or adenoids) and hereditary reasons as some of the causes for bedwetting.

“We never consulted a doctor for Alam’s issue,” says Khan’s mother. “His older brother had the same issue and he grew out of it. So we guessed Alam would too, and he did eventually.”

But the case may not be simple every time, warns Dr Grover. “Enuresis can affect the child on an emotional and mental level and can lead to further complications if there is an underlying medical reason,” he says. Hence, he encourages parents to confirm with a doctor if there is a reason to worry about their child’s bedwetting or if can they just wait and let the child outgrow the issue.

Help is here for enuresis

On dealing with the condition effectively, doctors share some valuable tips with Happiest Health.

“Reassuring the child that the condition will eventually improve is the best medicine,” says Dr Ramteke. He further suggests simple measures like restricting fluid consumption one to two hours before bedtime, visiting the loo before going to bed, encouraging the child to pass urine frequently during the daytime to gain control over the muscles and using an alarm to wake up during the night to pee.

Dr Gupta says a good way to control fluid intake before bedtime would be to let the child drink 80 per cent of the fluids in the morning and afternoon and reserve only 20 per cent for evenings. Additionally avoiding sugary and caffeine-containing drinks, especially in the evening also helps manage the condition, he adds.

“We also urge parents to stop using diapers, training pants or pull-up pants at home since these may prevent a child from wanting to get out of bed. Also, protect the child’s mattress with a waterproof sheet to avoid urine odour,” says Dr Gupta, adding that teasing the child or allowing siblings to tease him/her is a big no.

“Motivational and behavioural therapy with rewards and positive feedback, along with medications (taken only under the supervision of a paediatrician) can help tremendously as well,” says Dr Grover.

For Khan, it was his parents’ patience and support that helped him stay stable and outgrow the condition. “The reason why I can even speak about my condition openly today without getting affected in any way is that I don’t have any bitter memories associated with it,” says Khan proudly. “My mother was always there, and I can’t thank her enough for it.”