Treating symptoms such as high-grade fever, itchy rashes and body pain is key for those infected with chickenpox 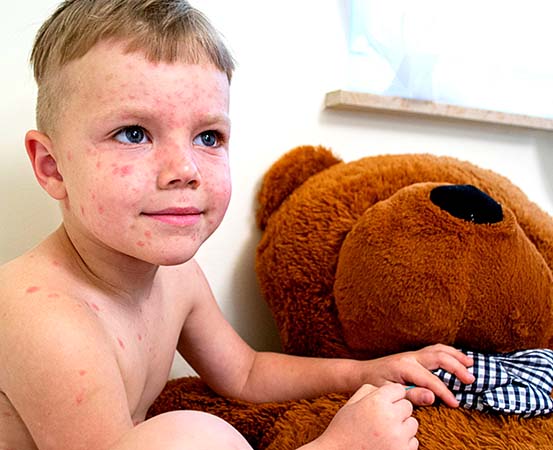 Sangeeta Bora, a 47-year-old mother from Assam, hadn’t been vaccinated for chickenpox. So, when her eight-month-old son was diagnosed with the disease after developing a high-grade fever and red rashes, she too was infected. The duo were isolated from the rest of the family to stop the further spread of the infection.

The period of isolation was an ordeal for Bora as she couldn’t move around freely and take proper care of her infant son.

Chickenpox is a contagious viral infection common in children, says Dr Swati Rajagopal, an infectious diseases specialist at Aster CMI Hospital, Bengaluru. The infection spreads through respiratory droplets from coughing or sneezing and direct contact such as through fluid from blisters, she adds.

The rashes usually begin from the chest and the back, and then progress to the face, says Dr Niranjan Patil, associate vice-president and scientific business head of infectious diseases at Metropolis Healthcare, Mumbai. He adds that the infection starts a day or two before the rashes appear and lasts until the last scab (crusty brown layer on the blister) dries and falls off.

Chickenpox is caused by the varicella zoster virus. Many get exposed to the virus during childhood, says Dr Patil. “Because of acquired immunity, most adults don’t get chickenpox. Those who haven’t got it in childhood are susceptible to developing the infection as adults,” he adds.

Dr Rajagopal says, “If a person has already had chickenpox, then the virus can reactivate later in life in people with a weakened immune system and result in herpes zoster.”

Most young people seem to recover well within seven to ten days, says Dr Rajagopal. Care should be taken in the form of:

Speaking to Happiest Health about managing scars after recovering from chickenpox, Dr Dileep Jude, a Pondicherry-based dermatologist at Dr Jude’s Hair Transplant & Skin Clinic, says that scarring occurs because of the itching of blisters. This can be managed with antihistamines and antibiotics if the pus is infected with bacteria. “Even though the blisters disappear within two weeks, there can be some residual pigmentation which can be treated with dermatologically recommended medicines,” he explains.

Who should be vaccinated?

Doctors say that the varicella vaccine is voluntary and comes in two doses. Those who need to take the vaccine include:

Painkillers should be taken only when a doctor prescribes them after evaluating the person’s medical history, says Dr Rajagopal. Some painkillers can adversely affect those with chickenpox, he adds.

Dr Patil advises against taking aspirin (an anti-inflammatory drug commonly used for pain relief) when infected with chickenpox as it can cause Reyes’ syndrome, a rare condition characterised by inflammation of the liver and brain. “In Reye’s syndrome, symptoms can be seen after a week of the infection,” says Dr Patil.

Dr Rajagopal says that the risk of excess bleeding (from injuries like cuts) is higher while having viral fevers because of the low platelet count which affects the clotting ability of blood to stop bleeding. “Taking painkillers like [ibuprofen] during chickenpox might cause hemolysis (a blood disorder where red blood cells are destroyed more than it is required by the body),” she says.

Takeaway: dos and don’ts of chickenpox