Home
Articles
Trouble sleeping? It could be melatonin deficiency
8

Trouble sleeping? It could be melatonin deficiency

Produced from the pineal gland, melatonin is known to promote sleep and maintain the sleep-wake cycle. Happiest Health speaks to experts to understand the sleep hormone better 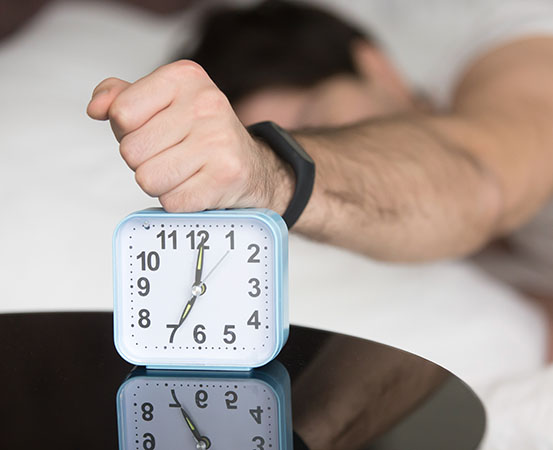 When night comes, how difficult can it be to fall asleep? For some, it’s a battle they fight every night and yet they never get a peaceful sleep. It is very common for people to experience trouble sleeping, however, only a few have clarity about the reasons causing them sleepless nights. Experts blame the hormone, melatonin, the deficiency of which causes sleeplessness.

Insomnia and other sleep-related issues are some of the signs that the body is not able to produce enough melatonin. It may also cause an individual to wake up too early in the morning and find it difficult to get back to sleep. Melatonin is also called the hormone of the darkness as it is produced in the brain in response to darkness. According to the National Institutes of Health (NIH), melatonin helps with the timing of one’s circadian rhythms (24-hour internal clock) and with sleep. Being exposed to light at night can block melatonin production and experience trouble in sleeping.

“The hormone is produced from the pineal gland and its best-known purpose is in the promotion of sleep and maintaining the sleep-wake cycle,” says Dr Manohar K N, consultant internal medicine, Manipal Hospital, Bengaluru.

Thirty-eight-year-old Varun Dixit, a resident of Mysuru struggled a lot to sleep and suffered from insomnia. Two years ago, he started experiencing trouble while sleeping and was very restless during work. Speaking to Happiest Health, he says, “I changed my work and the work involves interacting with clients from the United States due to which I end up working late in the night. Since most of us are working from home, my schedule had completely changed, and my sleep-wake cycle has been affected. I would stay up all night and sometimes, I would wake up as early as 5 am with just three hours sleep and feel drowsy and tired the entire day.”

It was only recently during his regular health check-ups, that he found out that he had multiple deficiencies which included melatonin along with vitamin D and B12 for which the doctors asked him to take supplements. However, for melatonin deficiency, he was advised to change his sleep habits and consume food rich in melatonin.

What does melatonin do?

Dr Abhradip Das, consultant pulmonologist, Narayana Multispeciality Hospital, Kolkata, says that melatonin is an important hormone for the regulation of the circadian rhythm. “The hormone can be blamed for trouble in sleep. Lack of melatonin causes insomnia and similar sleep-related issues. Those with the hormone deficiency will also face restlessness and increased irritability,” he says. He adds that the hormone makes a person feel drowsy, decreases sleep latency (time taken from full wakefulness to sleep) and also brings down the body temperature.

According to Dr Manohar, melatonin is also involved in blood pressure control. “Apart from that, it also helps insulin in its function, immune system regulation, increases bone formation and also helps in anti-oxidation,” he notes.

Trouble Sleep – Symptoms of low melatonin include insomnia, waking up easily in the middle of the night, not having many dreams while sleeping, superficial or anxious sleep and anxious thinking at night.

Restless legs – In restless leg syndrome, there is an urge to move the legs, especially in the evening. Imbalance in melatonin and serotonin, a neurotransmitter that carries messages between nerve cells in the brain and throughout the body, leads to restless legs. Some antidepressant medications can cause increased serotonin production.

Menopause symptoms affect sleep – The symptoms of menopause can worsen with a lack of melatonin. Hot flashes, heart palpitations, morning depression and irregular cycles are believed to be improved by melatonin supplementation.

Intestinal symptoms – Intestinal spasms, pain and hyperactivity can also signify that melatonin is low. People with colitis (inflammation of the inner lining of the colon) may need colitis treatment.

Increased ageing process – Melatonin supplementation has shown to decrease the ageing process. It’s a powerful antioxidant, and it helps protect all tissues within the body.

Dixit says that the doctor informed him how vitamin D and B12 play a main role in correcting the other deficiencies he had. But Dixit was never on melatonin supplements. He only made lifestyle changes. “I was asked to cut down on coffee after 4 pm and to avoid blue screen at night. Avoiding blue screen was not possible in my case as I have to work till one in the morning. Hence the doctor suggested I make my bedroom darker and sleep with the bed lights off so that it helps me fall asleep sooner.” Dixit was also asked to step out into the sun during the day so that his body gets adjusted to the 24-hour cycle and because the body starts to produce melatonin in the evening. He says, “These small changes in my routine have helped a lot in the last six months and now I’m getting a restful sleep.”

Dr Manohar says that due to irregular sleeping patterns and lack of a daily routine (mismatch with environmental light-dark cycle), melatonin secretion may get impaired and hence causes sleeplessness. “Melatonin deficiency also causes a poor stress response, restlessness, insomnia and sometimes cause a person to wake up too early in the morning,” he says. According to Dr Das, the production of hormones decreases with increased age and it is lowest in the elderly.

According to Sleep Health Foundation, blood melatonin level starts to go up about two hours before the person goes to sleep. It helps establish the conditions for sleep and one’s core body temperature will go down slightly at this time.

Dr Das lists out the causes of melatonin deficiency:

He says that working professionals too experience melatonin deficiency. However, it is mostly seen among the elderly.

Dr Manohar says that the melatonin hormone decreases with the consumption of alcohol and increased screen time during the night interferes with its function.

Dr Sood says that most food databases don’t list the amount of melatonin in foods, but consistent with available research, the listed six foods are good sources of melatonin:

Tart cherry juice is one of the best-known sleeping aids. Researchers have found that it increases melatonin levels within the body and enhances sleep. But cherry juice is high in sugar and drinking it every night could significantly raise calorie intake. Eating cherries rather than drinking their juice is a healthier way of getting melatonin.

Produced by a plant native to China, goji berries are touted for their anti-ageing effects. They’re also high in melatonin and may improve sleep.

Among animal products, eggs are one of the best sources of melatonin. Eggs are also highly nutritious, offering protein and iron, among other essential nutrients.

Warm milk is often a traditional remedy for insomnia. So, it’s no surprise that it’s high in melatonin.

Fish may be a better source of melatonin than other meats. The simplest options are oily fish like salmon and sardines, which also provide valuable omega-3 fatty acids.

Most nuts have an honest amount of melatonin. Pistachios and almonds are among the very best. Nuts are also an excellent source of many antioxidants, healthy omega-3 fats and minerals.